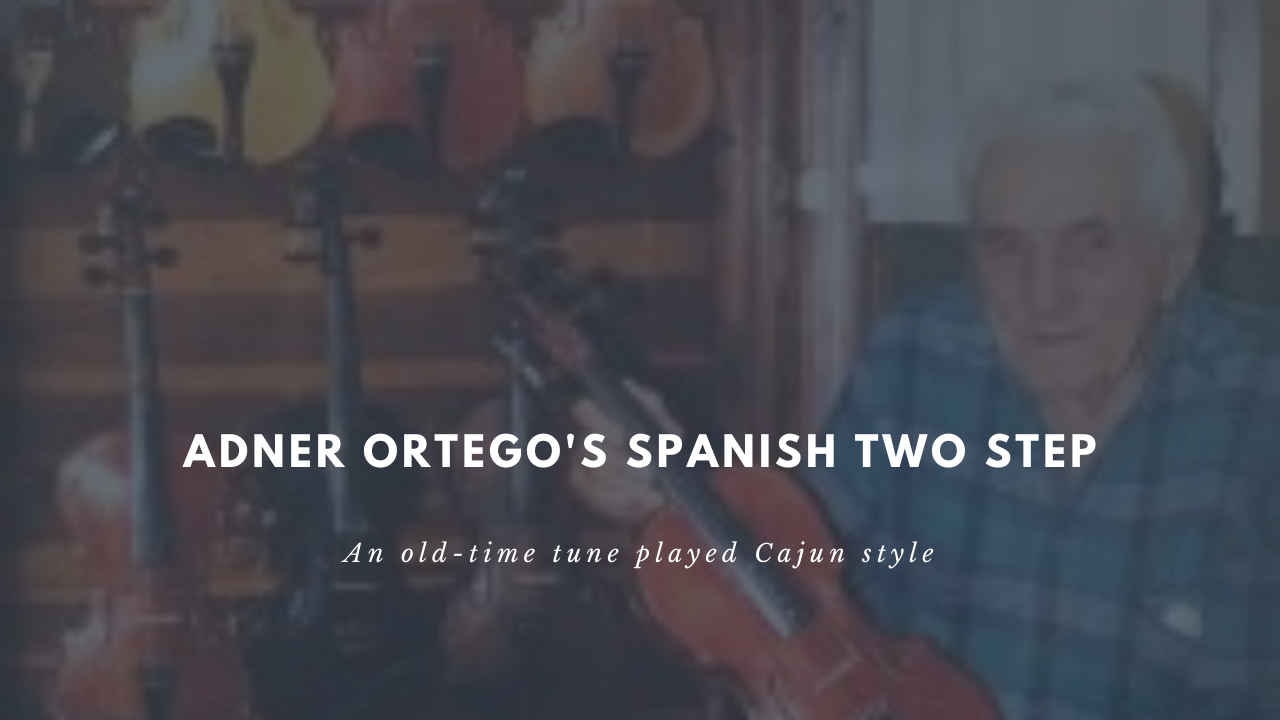 Hi, I’m Mitch Reed and welcome to my vlog. My vlog today is on an old friend of mine who taught me a lot about Cajun fiddle when I was young. He was almost really like a grandfather to me but also a very good friend.

His name was Adner Ortego and he was from Grand Prairie, Louisiana. He was a really interesting character. He lived out kind of in the countryside. He lived by himself. Made his own sausage, boudin, his own tasso, he had a smokehouse, he had a pecan orchard, he had fig trees, and plum trees, and pears, and he made homemade wine, and he made his own fiddles as well.

He taught me a lot of interesting old tunes. One of the tunes he played that I really never heard any other Cajuns play was a tune called the Spanish Two-step so I wanted to play that for you it in the style he played. I’m going to play it kind of slow because I haven’t played the tune in a while and I’ve had to kind of relearn it. So I just wanted to share it with you out there on Youtube and see if anybody likes it. I’m sure there’s a lot of versions of this tune out there.

I believe it’s a Texas tune and a lot of east Texas fiddling made its way into Louisiana, into Cajun country, especially because of the oil industry and that kind of thing. This is Mr. Ortego’s version of it and it goes like this. [1:33]

Alright, the Spanish Two-step, Mr. Adner Ortego’s version. Mr. Ortego was an incredible person, a Cajun-Creole that lived out in the woods. He taught me a lot about fiddle playing. I took Suzuki violin for a couple of years. And really, back in the, let’s say, the late 80s there were Cajun fiddle teachers around here growing up in Lafayette Louisiana. I took violin and then my father who was an accordion player brought me to visit some older fiddle players that didn’t teach but could pay it a little slower and break things down, at least talk about the style and things. One of the things Mr. Ortego did was he introduced me to paying double strings, which I had never really done before. Playing violin is mostly just single strings.

That kind of thing. Very interesting. So like his version of the Lake Aruther Stomp [04:20]

Those kinds of slides were really nice. So the Spanish Two-Step. I’m gonna play it a little slower, just if you like this tune it’ll give you a chance to pick it up. If you dig this kind of stuff, check out my website www.mitchreedmsiclessons.com where I break down Cajun and Creole traditional fiddle tunes at intermediate and beginner level. So let me play this a little bit slower. I’ll break it into parts. So there's an A part and there’s a B part and each part is played twice. So this is the A part. It starts like this. [05:14]

Alright, and that’s your A part there. The A part really goes right into the B part. It’s almost like the last of A part is the first note of the B part. There is a variation you can hear in the third phrase at the very end. So the first time we play it through it does something a little different. The second time, it kind of brings it home. So let’s go to the B part and it goes like this. [06:28] Then it starts back to the A Part.

So if you’re digging this and want to learn how to play it, let’s play together slowly now. A part twice, B part twice. [07:16]

Alright, a fun little tune I wanted to share with you out there. So all you fiddlers stay inspired, keep on playing, keep digging for tunes. Hope to see you out there soon fiddling away. Take care, thanks for joining me!