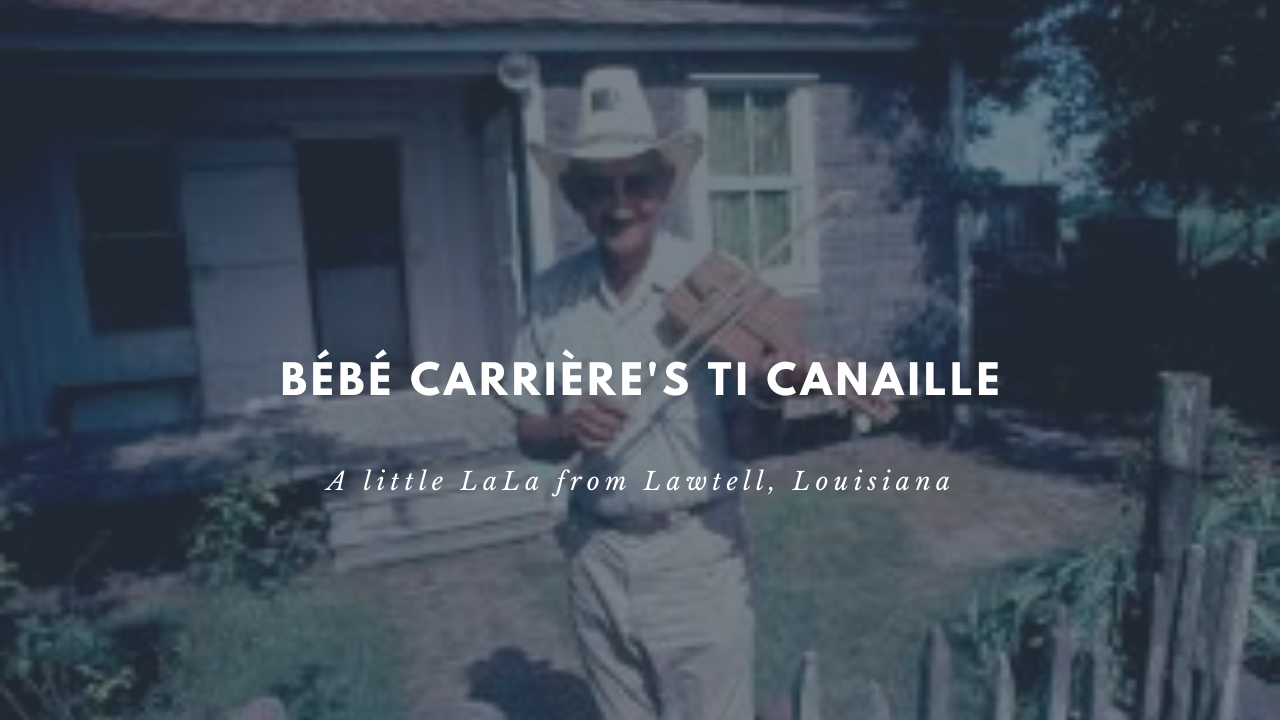 Hi, I’m Mitch Reed. Welcome to my vlog. And today I’m going to talk about a great old-time fiddler Be’Be’ Carriere, who was a huge inspiration to me, and to a lot of other fiddle players. Michael Doucet, and Kevin Wimmer, just to name a few. And he was like Dennis McGee. He was born, you know, in the 1890s and learned from some really old-time fiddlers and did some different types of tuning. He cross tuned his violin. He and Dennis played a lot of the same tunes, but call them different things. But Be’Be’ was from an area called Lawtell, Louisiana. And the style of music that came out of that area was known as LaLa music, so it was kind of unique to that area. So if you listen to the Carriere Brothers’ record, you can hear it has almost like a hint of Caribbean in there, you know, African and Caribbean and definitely some old French. They play Polkas and Mazurkas and all that kinds of stuff.

So I’m going to play one that he called. “Tee Canaille”, which just means “you little slag girl, little sly woman”. And there’s words to it too. I’m not going to sing it. I’ll just play the tune and it goes something like this. It’s kind of a haunting Waltz. [1:21]

'Tee Carriere’, Be’Be’ Carriere. Be’Be’ Carriere lived to be well into his nineties. The story I heard from his nephew, Calvin, was that he basically outlived most of the musicians that he played with. And you know, there were younger musicians to play with, but he played an older style and he really just preferred playing with his old friends and they had all, you know, passed away. So he got to a point, I think it was when he was about 92. He just sold his fiddle, sold it away, and moved to Beaumont, Texas to live with his daughter who was a nurse and lived out the rest of his days there not really playing music at all. Hey, you know, that’s okay. That was his choice.

But I never got to meet Be’Be’. But I did spend a lot of time hanging out with Calvin Carriere, who was his nephew. And Calvin told me a lot of stories about Be’Be and you know, how he was a real character and just a great person. I just wanted to share that with y’all today. Check out the Carriere Brothers on iTunes and you can find it a lot of other ways. But check out Be’Be’ and Eraste Carriere and the amazing old-time Creole tunes that they played. LaLa tunes like they called them. So thanks so much for joining me today. Stay inspired and keep on fiddling! Thank you.