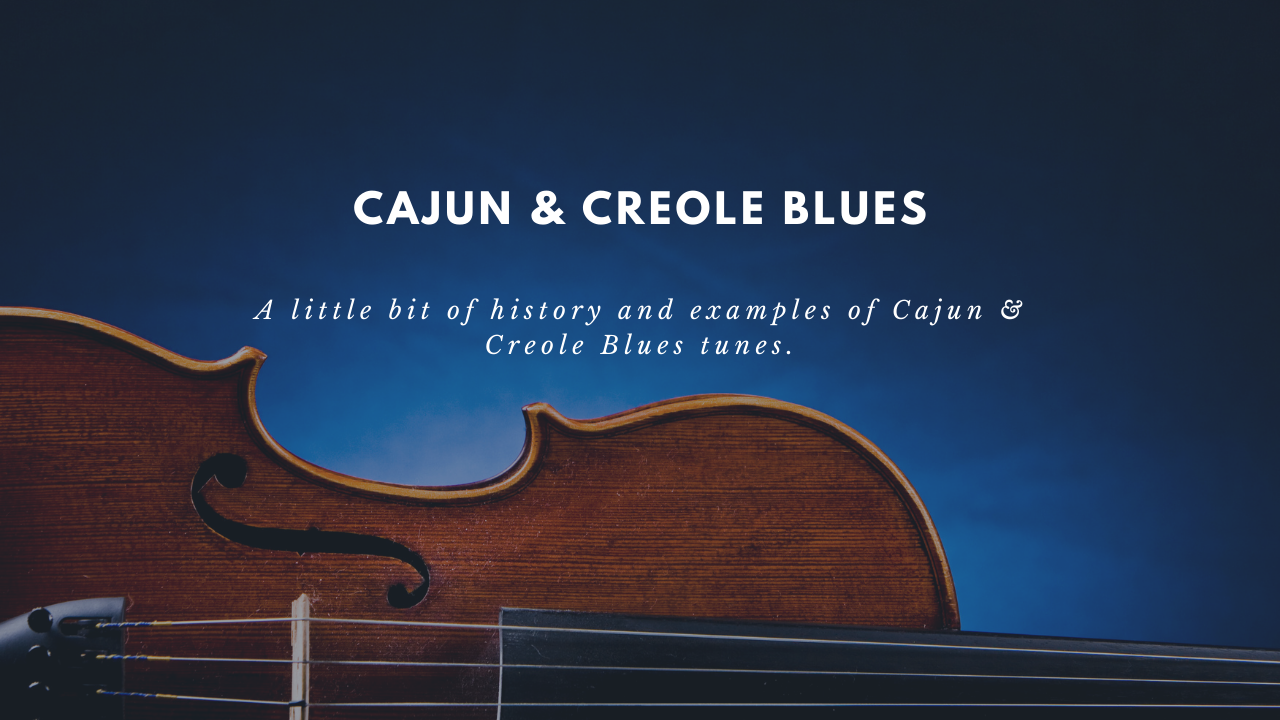 Hi! I’m Mitch Reed. My vlog this week is on Cajun and Creole Blues.  I just wanted to talk a little bit about the origins of that. Some of the people I was lucky to study with: Wade Frugé, Canray Fontenot, Dennis McGee, those people. Definitely, there was a mixture, Creole and Cajun big influence on the blues so…One of the first guys I think that was so influential for Canray Fontenot and Wade Frugé was a guy named Douglas Bellard and he was from Eunice or Chataignier and he was the first Creole black fiddle player…first, excuse me, black fiddle player to record 78s and he had a tune, one of the tunes that he wrote was Flames d’enfer One Step. So I’ll play that for you now just to show you a little bit about that style…[00:54]

Yeah! So the Flames d’enfer One Step. That was Douglas Bellard’s but I actually learned it from Wade Frugé. So Wade was really influenced by Douglas and then also Wade learned fiddle from a black French-speaking fiddle player from around an area called Tasso, Louisiana…right outside of Eunice. Wade said he was left-handed and he worked at a gas station and he’d bring his fiddle in a flour sack and when he wasn’t pumping gas he’d play his fiddle in front of the gas station. So Wade used to walk a good ways to go meet up with him and learn, you know, a couple of tunes here and there.

So yeah… so you know one of the things we could maybe look at is just some of the patterns, the sliding patterns. So one of the first ones I remember trying to learn this from Wade is this little pattern here…And we’ll figure out…we’ll keep it all based on… I think they are mostly based on G…[3:26]

That’s a good one right there…[3:34] So I’m starting on the E, just starting with a slide… and the next phrase…[3:50]…And just that by itself is really cool…You know that’s kind of cool. You know what keeps going down…it’s a low second here…[4:01]…and then I’m doing that fourth finger unison on the G, the low G string and D. So that seems to be used in a lot of stuff here… But that’s a good pattern.

And then the other thing you could do, too, is just take the modal… you know, the G in modal scale…[4:28]. And then you can get tunes like…[4:45] Baby, Please Don’t Go…the Carrière’s played that…So that’s kind of a fun one to play.

So one of the tunes too I found that was really nice, taught me a lot about Creole fiddle, was when I heard Clifton Chenier. His uncle played fiddle with him and the story goes that, you know, they wanted Clifton to record with a fiddle and he mentioned his uncle but when they got to his uncle’s house it’d been a long time since he’d played and his uncle went to get his fiddle but it was all melted. In Louisiana the heat and weather fiddles…if you don’t keep…if you don’t you know, keep playing them they sometimes melt. So he had to put it all back together with tape and glue and… But they recorded this song together, it’s really cool, it’s just called Black Gal. But that helped me a lot to learn about old Creole fiddle tunes. I’ll play a little bit of that, Black Gal. So it goes like this…[6:42]

So that’s a really cool tune to learn and definitely I’m gonna break that down this week. I’m gonna break it down at more of an intermediate level but if you can, check it out.

The other one that I thought was really interesting, Dennis McGee had a tune that seemed to be really funny. It’s a tune called You Got To Go See Big Joe and evidently it’s about a whorehouse and it’s about a…you know…a musician at the whorehouse house is telling the woman you gotta go pay your pimp, Big Joe’s looking for you so… Some old school stuff here. Not really Politically Correct so sorry if I offend anybody. But it was on Dennis’s field recording so I’ll play that one, that’s kind of unique tune and it’s called Got To Go See Big Joe…[8:44]

And it has words too, English words that Dennis sang and…So that was kind of fun. So anyway I always think it’s very important that…one of the things I want to mention on this vlog is when you are building your repertoire most people learn Two Step, Waltz, Two Step, Waltz. But I try to actually…for every Two-Step and Waltz that I learn, I tried to learn Blues as well or something Bluesy because I feel like there’s something we’re kind of losing in Cajun music. Zydeco music still has it but in Cajun music, there were always blueses and you know one of the…probably the most… ones you still hear a lot is when you go to a Cajun Jam is the French Blues or the Cajun Blues maybe. It’s called, drawing blank right now, but the one that goes like this…[10:55]

The Bosco Blues! That’s what it’s called: Bosco Blues. So that, you know, stuff like that. Iry LeJeune recorded that one but there’s a lot of really good stuff out there you know, you just have to kinda dig deep. Definitely listen to the older recordings, the 78 recordings you can find stuff because it seems like Leo Soileau and Dennis McGee and Mayeus Lafleur all those guys were doing a lot of blueses, they were recording them on 78 recordings.

I’m gonna do one that Moise did that I always thought was really cool, another Blues he did… just called it Blues de Neg Francaise cuz he learned tunes from French, black French-speaking cane cutters from Arnaudville and worked with them in the fields and on the breaks they would play Accordion under a Pecan tree, and this is one of the ones that he learned. So Blues de Neg Francaise…[12:24]

So that’s another nice old-time Blues. So, Yeah…One of the things that you wanna do when you get into this style is first of all do a lot of listening. Listen, surround yourself with some really Bluesy players. Most of the great players were Bluesy so just listen to that. But most of it is slides and patterns. So once you get comfortable, you know, with the slides… Even sliding up to the note or sliding down to an open string is that…you know,  that kind of stuff.

So practice your slides. I think you learn patterns really just by learning tunes. You know you can… if you look at the keys, you know, if you look at just the key of G, if you just take the key of G tuned down on a Cajun fiddle, and then just take some… listen to some tunes that have those bluesy patterns and you can really pick up a lot of stuff and you can throw it into other tunes. So that’s one of the ways I look at it.

Especially when you’re trying to improvise and that kind of thing you know. So, and then you know, just let your personality come out, but listening is everything. Surround yourself with music, and the history of music. Go back as far as you can and then come all the way to what’s going on now. That will really help you a lot.

So yeah…I’m gonna close now with a tune that I learned from Dennis McGee and he called this The Wang Wang Blues. It’s kind of an interesting Blues and I’m gonna break this one down this week as well so come check out my website if you like these tunes and if you’d like to learn a little bit more about the Blues, Cajun Blues, Creole Blues…So it goes like this…[15:27]

Alright. The Wang Wang Blues. So thank you so much for joining me this week on my vlog on Cajun and Creole Blues and just the Blues in general in French music down here in Southwest Louisiana. So hope you enjoyed it and I hope you learned a little bit. Come check out my website and I’m gonna be breaking some of these tunes down this week and feel free to send me a line, an email, a line, a comment, or whatever, you know. If you’ve any questions or whatever you think I’ll love to hear.

So stay inspired, stay fiddling, and hope to see you out there soon. Thank you so much for joining me. Bye-bye.