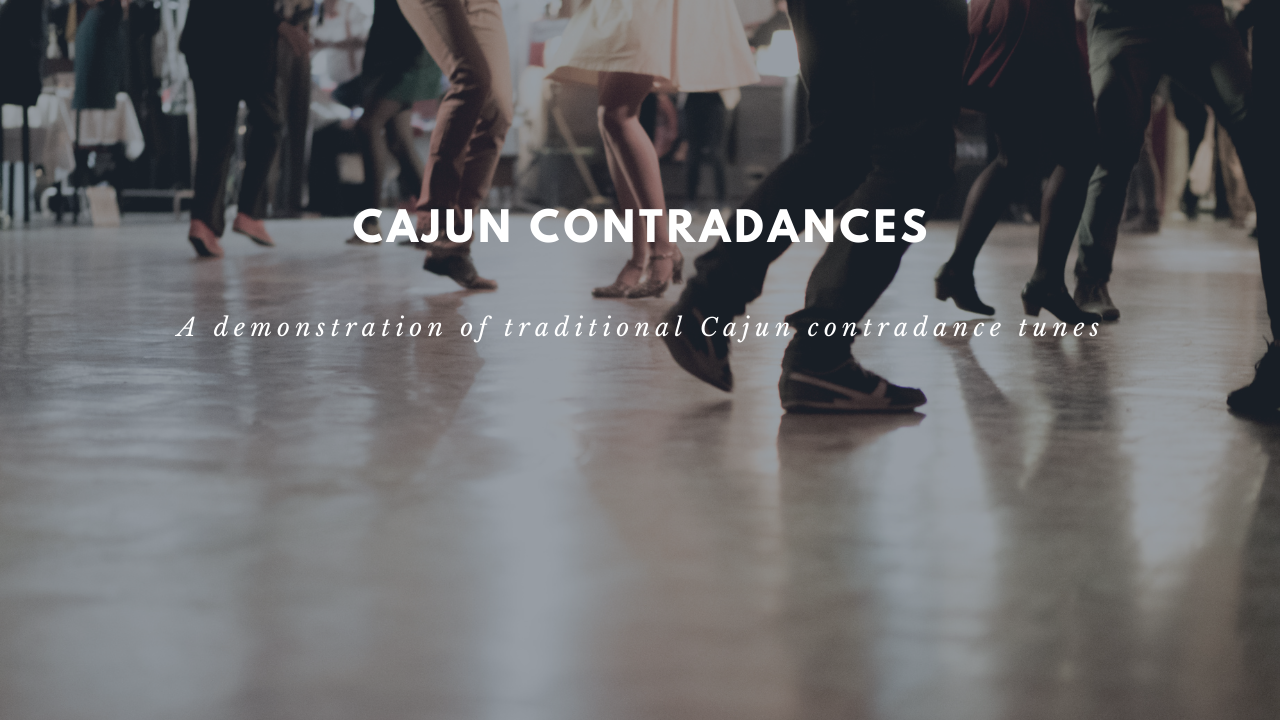 Sounds like I live in Manhattan or something. We’ve got all kinds of outside sounds of big machines rolling on the streets of Scott, Louisiana; trying to fix it up after the flood. Basically, we got some new water drains and we’re going to get some sidewalks so we’ll be able to put on those rollerblades or skateboards or whatever you want to do and hit the big town of Scott…go get some boudin on some rollerblades, that sounds like fun. But so sorry for all the noise…

The Vlog today is on contradances. There are a lot of great tunes that are called “Contradance” and I just want to share a few of them with you. Basically, a contradance is pretty much like a reel. There’s a few different things and I’m not an expert on the theory of the tunes or anything like that. But there’s a few little personalities you’ll find in the contradance that may be different from a reel… but it’s very close to a reel.

So there’s two that I really enjoy. There’s one that Canray did and we just called it Canray’s Contradance, and then Austin Pitre did a contradance as well. So I just want to share those with you, play them, and just talk a little bit about that.

So this first one, I’ll play it slow then I’ll play it fast to maybe give you the chance to catch the tune. It’s really fun. This is Canray’s Contradance, and of course, contradance comes from square dances where, in the old days, let’s say a hundred years ago, a hundred and fifty years ago, people would have house dances and everybody in the community would at some time get to dance with everyone else in there. So they would exchange partners and everybody would, you know basically like a square dance, everybody would have their turn dancing with the other people in the community. So it’s a great way to socialize and mingle and get to know and trust your neighbors in your community in case you needed help or you had a big pig you wanted to slaughter and you needed somebody to help you out with that. Alright, so let’s try it. So here we go. I’m going to do it slow first and then fast. So, “Canray’s Contradance”…[02:32]…Alright! Canray Fontenot, “Canray’s Contradance” an old-time square dance tune.

The other one that I really like too is Austin Pitre. He was a great fiddle player and he was even a tremendous accordion player and singer. His fiddling was really old-timey sounding, very bluesy, very Creole. This was an interesting tune that he played, we just call it “Austin Pete’s Contradance”. So it goes like this…I’ll do the same thing, I’ll play it slow so you can pick up the notes, and then I’ll play it fast with all the stuff in it. So it goes like this…[06:10]…Alright, good old Austin Pitre.

The last guy I want to talk about was a tremendous fiddler, really not known very much. Harry Oster did some recordings and Rounder Records did a few recordings of him, but his name was Aubrey DeVille and he was from Mamou and my family’s from Mamou, on both sides. My mom and dad both knew all these characters and I never got to meet these people but my mom and dad would tell me stories about them. Mamou was just a very interesting place…if you’ve ever been there you know what I mean. It had a lot of characters there and this is one that he played, again another contradance, very simple. So you could start to see the personalities of these dances, they were in the Philippines. They were just… melodies are fairly simple but the rhythm is really nice for dancing. So this one is just called The Bull, it’s called Le Boeuf So it goes like this…[08:48]…Alright. I’ll play it slow and then I’ll play it a little faster…[09:16]…Alright, fun stuff to play, old-time contradances, from Evangeline Parish we should say.

Thanks so much for joining me today on The Vlog and tune in, I’m gonna have some more coming your way. But check out the Harry Oster stuff, the Acadian folk tunes. Go to iTunes, there’s a great collection of old-time Cajun recordings. I mean you can just type in these names that I’ve talked about and hopefully they’ll come up so check it out.

Because you have to stay inspired to keep on fiddling and that means listening to new stuff, getting turned on the new stuff, learning new tunes, and to me, that’s the secret; that and playing your fiddle every day. Alright, thanks so much! Have a great day and I’ll see you soon.