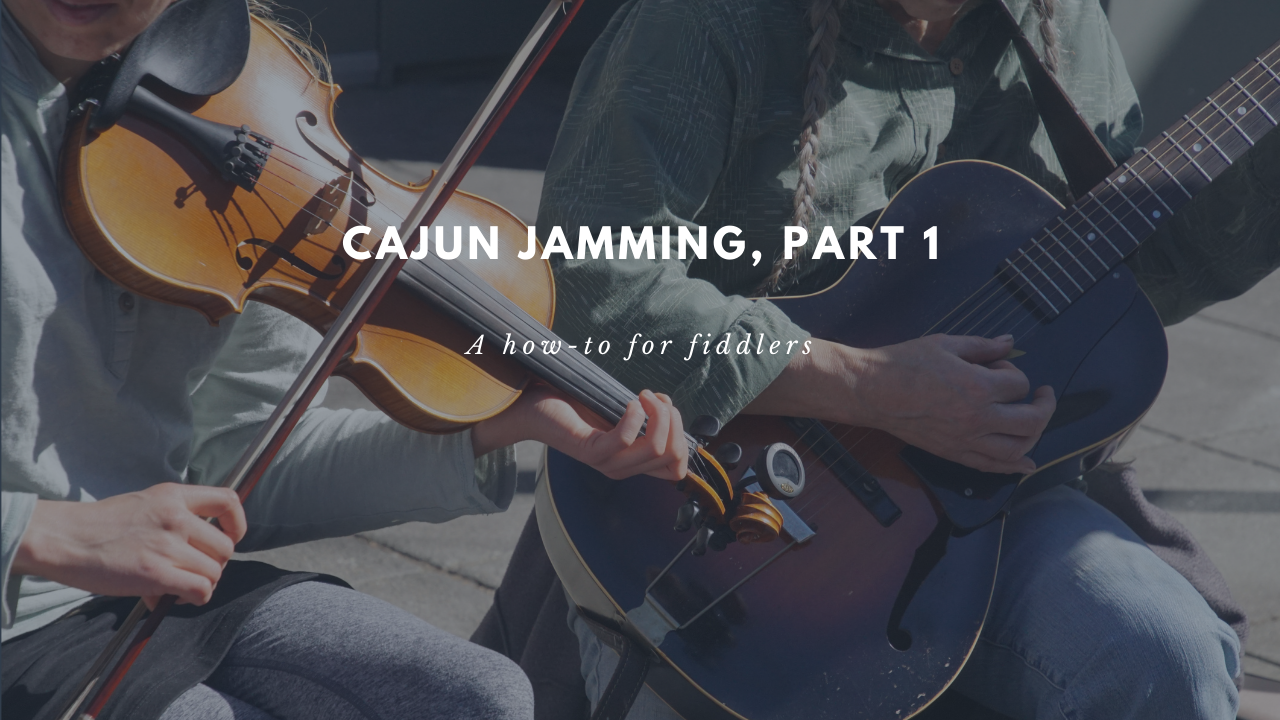 Hi! I’m Mitch Reed. Welcome to my fiddle vlog today. I wanted to talk about some things that people have been asking about and it’s really just talking about if you go to a jam what to expect. You know there are not a lot of rules but there’s kind of a typical arrangement and so that’s one of the first things I was going to talk about was a lot of times people ask me, “if you’re playing fiddle and you go to a local Cajun Jam around Lafayette what do you do? When do you second? When do you play the lead?” and all that stuff.

So usually the way it starts is the accordion will kick off the tune and will usually play the A part and the B part and the singer will sing after that. While that’s going on, the fiddles usually just play the chords. So you would be playing chords, just like a guitar would be playing a C chord and a D chord, the fiddles would pretty much follow the guitar and if you’re playing at two-step you know you’ll be doing some kind of shuffle bowing there, let’s say something like…[01:13]

When you’re with a group of fiddlers it’s up to you. You can sometimes play, you can second behind a lead fiddler or you can even play a harmony if that works out. Most people just would play together.

So just talking about the role of the fiddle at a jam, what to do. I’ll pick a little tune just to kind of show you. So if we take let’s say J’ai Passé Devant Ta Porte, a very traditional tune you’ll hear at most jams around here, the accordion would kick it off and play the A part and the B part and then the singer would sing the fiddle would play the chords while that’s going on. So it’s in the key of G and my fiddle’s tuned down so…[2:40]…So I’d hold that G chord…[2:42]…It’s a quick D in there.

So that’s basically what you’re doing. You are playing the fiddle chords and you’re pretty much playing along with the guitar players. So that can be helpful, too. A lot of times fiddlers will ask me “when do I know when to change chords if you’re new to the music?” Yeah…follow a guitar player. That’s a great guide… If there’s a guitar player at the jam that knows the chords when to make chord changes when they switch to the next chord, that tells you to switch…and just use your ears, you know; don’t be afraid to make mistakes. Usually, at a jam nobody can really totally hear what you’re doing anyway, it’s a big group sound. So after the singer sings then the fiddles take the ride….you know you’d be seconding…[3:45]

So I played the ride and then I went back to playing the chords and that’s usually what fiddles do at a typical Cajun jam around here, around Lafayette, Eunice, that area. And the best thing to do is just be aware of what the other people are doing. When you go to a jam it’s all about fun, it’s not about showing off or showing somebody else, and you know, what I usually do is I kind of just watching everybody and see what they are doing. And I like when the fiddles all play together. I think that’s fun. So if you don’t know the melody you can just stay on the chords. So that’s the other thing you can do that’s kind of cool.

So to get to that level where you feel you could go to a jam or wanna try to learn from a jam, the best thing to do is learn your chords. So learn your C chord, your G chord, your D chord, and then your F chord. And my fiddle’s tuned down so you know it’s a lot easier to play those chords. Typically, that’s what most people around here do when they go to jams; they have their fiddles tuned down a whole step. That’s what we call Cajun tuning. Most of the accordions are in the key of C and so most of the tunes are gonna be played in the key of C, G, and occasionally F.

So that’s just a little bit of tips about going to a jam…and jams are really great to learn from. Even if you don’t know the melody sometimes just get up on the high strings and try to figure it out, you know, that’s kind of how I learned. Going to Marc Savoy’s jam and the old guys were kind of pushing me to just…to try to play it even though I wasn’t really familiar with the melody you know. At least I got on the high strings and tried to figure it out. So don’t be afraid to mess up but be respectful of the older players and the more experienced players. And it’s a great place to learn, you’ll get a lot of advice and hopefully a lot of support and inspiration.

Find a jam that’s right for you, they’re all different. So some jams have younger people, some jams have older people, some are mixed and…So just find the one you’re comfortable with and go on a weekly or monthly basis, that would be great. So good luck out there jamming and keep playing your fiddle and keep having fun. Thank you.