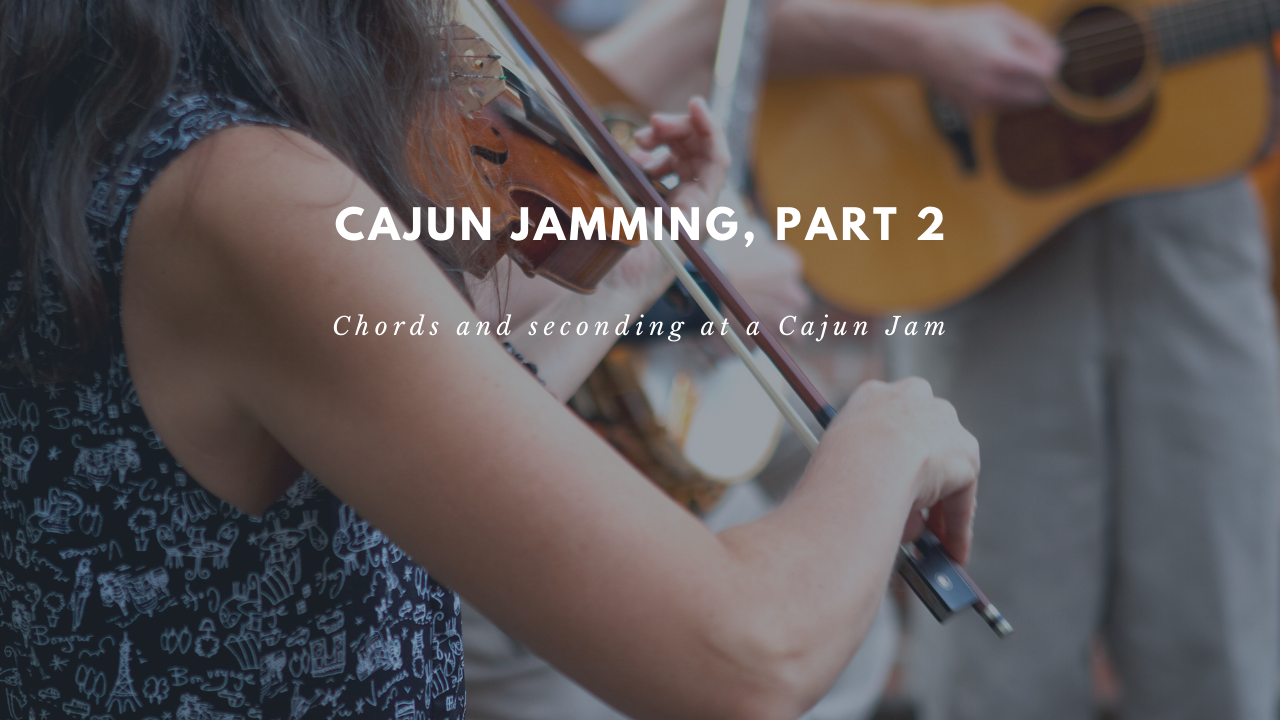 The first thing I want to say is that my fiddle is tuned down…[00:34] So it’s tuned in what we call Cajun tuning. So the E string is a D, then the A string is tuned down to a G, the D to a C, and the G to an F.  Alright, this just makes it easier to play in the key of C…[00:56] and F and G also because the most common Cajun accordion key is C accordion. So this makes it easier to play the fiddle along with the C accordion and that’s the main reason why we tune this way.

So the first chord, probably one of the chords you’ll use the most when you go to a jam session is the G chord, and the way I play that is I take my first finger and I bar across the low G string. I’m going to still call these strings by their real names so we don’t get confused. So I’m going to take my first finger and bar two strings with it meaning I’m gonna put on two strings. I’m gonna put in on the low G and the D string and just with that one finger, I’m gonna bow both strings and I get a G chord…[1:51]

So that’s really used a lot. I use this chord a whole lot in Cajun music. And the next chord that is used a lot is the C chord. So to play that, I’m gonna take my first finger and I’m gonna put it on the first finger position on the G string with the open D and that gives me a C chord…[2:15]

Alright! And then the next chord is the D chord. I’m gonna play it the same way I would play my G but up a string. So I’m gonna take one finger again and bar the D string and the A string this time and play those two together. That is my D chord…[2:38]

Alright. And then the fourth chord that’s used a lot in Cajun music at jams is the F chord, and though…I like to play the lowest form of the F and that’s just an open G and D…[2:53]…So that’s my F chord.

So these four chords that I just showed are the lowest forms of the chord on the fiddle and one of the good things is you know, later on, when you get a little bit more technique on, you can do some bow rocking which is nice. But for right now, you know, just learning to play those chords with the shuffle bowing, some kind of rhythmic bowing, that would be the first step in practicing those. So you know like the G…[3:23]…C…[3:27]…D…[3:30]…and we’ll go to the  F…[3:34]…

Okay. So those are those four chords, just randomly picked, you know…It’s not really a tune or anything. But with the lowest forms, what you can do is you can also do some bow rocking which is kind of a more old-timey style, and I like using it a lot. So like the G…[4:07]…If you rock the G if you go…[4:10]…what I’m doing there is I’m making the low G chord and I’m rocking to the D and the A…[4:18]…I’m just leaving my finger down…[4:22]…So I’m never lifting it up but I’m rocking the bow to the D and the A…[4:28]…that’s a bow rocking rhythm there. The C chord you can do the same thing…[4:39] And that works like that.

The F, you can do a high F chord which is a first finger on the A and a low second finger on the E…[5:02]…That’s your F on the E and A strings. And you can rock with the open low strings and you get…[5:28]… So if you put all that together you can get some interesting things that, if you listen to a lot of old-time recordings, you can hear how fiddlers used to do this to accompany another fiddler on the accordion, it’s kind of a fun way to play… So I’ll just do those chords rocking now so start with the G…[5:54]…C…[5:57]…D…[6:01]…and the F…[6:03]…

So it’s a fun way to accompany another instrument or you can even sing and do that and it makes a fiddle really come alive because you’re using all four strings.

So that’s a great first approach to chords when you go to jams. My next advice is to just watch the guitar players and watch what they’re doing and if you can find a guitar player that’s playing open chords, and when you see…you know, you don’t even have to know guitar but maybe know the shapes of the chords so that you can identify them. When you see a guitar player playing a C, play a C chord. When you see him go to a D, play a D chord; go to a G, you know?

Anyway, that’s my advice, that’s my vlog today, hope you enjoyed it, hope you got something out of it and continue visiting the website and following the vlogs and let me know too what you’re interested in. These all come from questions that I get, emails, and people asking me questions about you know just simple techniques about you know how to go to a jam, how to approach a jam, how to learn the chords on the fiddle all that stuff. So let me know what you’re interested in and I’ll do my best to show you what I do. Okay! Thank you so much, have a great day.