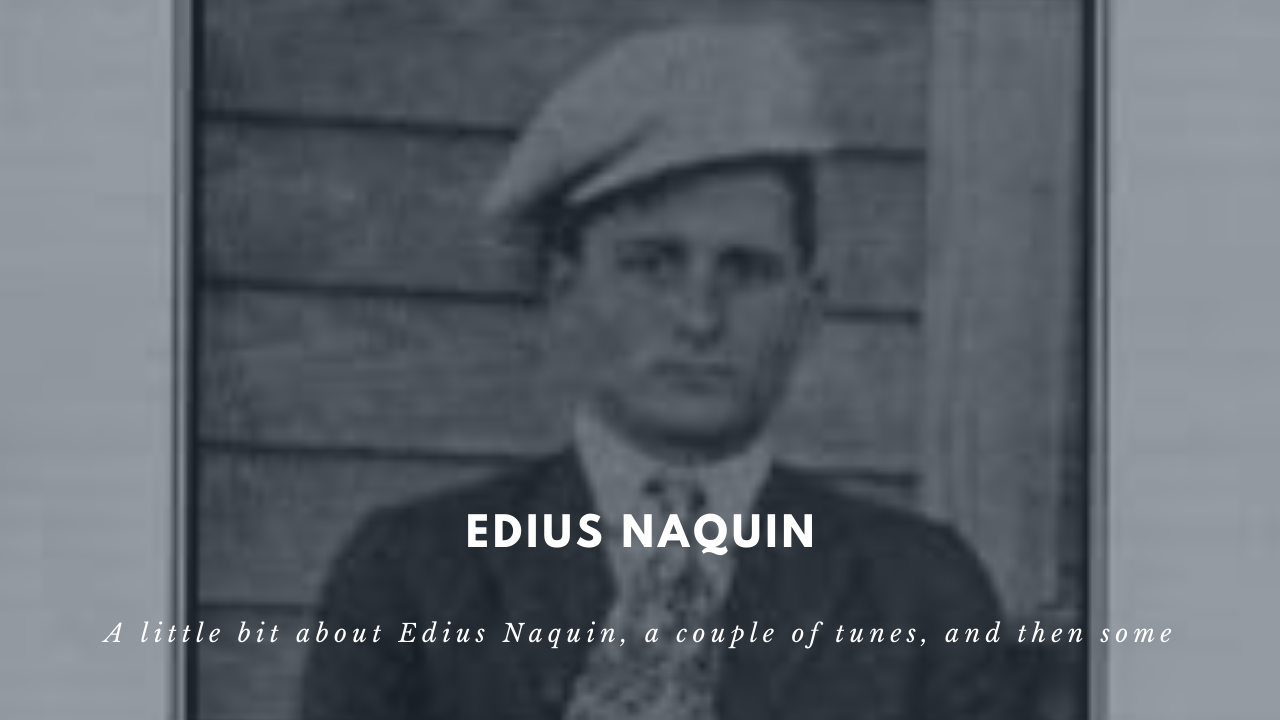 That is a tune by Eidus Naquin, a legendary musician from Mamou, Louisiana. He sang a lot of old ballads and played a lot of old really obscured archaic tunes with very interesting stories about kings, queens, magical worlds, and things like that. Definitely some ties to France and Europe, interesting character, he was a good friend of my uncle, Revon Reed, who did a lot of field recordings of Mamou musicians in the ’60s. He and Edius were part of this group of men in Mamou in the late 1960s that were called the Mamou Supper Club and people like Revon Reed, Paul Tate, Adam and Cyp Landreneau, Butch Sealy, Edius Naquin, Isom Fontenot, just to name a few. Some of you from Mamou might recognize these names.

So Edius was just a really interesting guy, and I thought it would be fun to talk about him today. He is on a record that came out a couple of years ago and you can download it on your devices. It’s on iTunes called basically, Louisiana Cajun and Creole Music: The Newport Field Recordings. It’s kind of a weird title; it sounds like to me a lot of home recordings. These guys like Ralph Rinzler, who was a folklorist and worked for the Library of Congress, came down to Louisiana in what sounds like maybe the early 70s, late 60s and recorded some of these guys in either their homes or the bars playing tunes. So yeah, check it out!

These are the types of recordings that inspire me. I like the old guys that played fiddle and harmonica and accordion but also sang ballads by themselves and even played fiddle unaccompanied. You don’t hear that too much anymore but that’s what Edius Naquin played- a lot of unaccompanied fiddle tunes. Maybe his tunes were just so strange and so old, I don’t know if people knew the chords to the tunes. Check out BeauSoleil recordings because Michael Doucet has done a great job of bringing back some of Edius’ music and putting it in more of a Cajun band sound. David Doucet has come up with guitar chords and things like that so if you do like these tunes and you want to play with a guitar player, check out BeauSoleil’s The Mad Reel with Micheal Doucet. Also, Gitane is another great record that BeauSoleil did with Edius tunes.

I’ll do one more Edius tune. Hopefully, everyone made it through the freeze and the flu season. It's been a really tough time down here in Louisiana with the flu and then just freezing temperatures, snow, ice… things we never get. If there were any Cajun tunes about snow and ice and freezing, I would play it right now. If you know any, in the comments let me know but I don’t know of any because we don’t usually get this weather.

Alright, Edius Naquin’s Hack à Moureau. I actually inherited some of Revon’s field recordings, and I tried to preserve them as best I could and put them in the archive at UL. One of the first things that I came across about Edius Naquin and Revon and the gang was they had made the trip to Washington, D.C. for the Smithsonian Folklife Festival and they were all rooming together in this hotel or this bunkhouse or something near an airport. They were, of course, having some drinks and you could hear the planes flying overhead and they were playing tunes, and they wrote a song called La Valse de Washington, D.C.

Then they all went to bed, and Revon woke up maybe 2:30 in the morning, and he had a little reel to reel recorder with him. He decided to have a snoring contest and there was an awful lot of snoring going on. You can about imagine about 10 Cajuns sleeping there, drinking all night and playing tunes. He went around recording different people but the one person who won the contest was Edius Naquin and he had this crazy high snore and it’s just an unbelievable recording. Revon was just great about having fun and being funny. It wasn’t just about music. He had this really crazy high snore just like his voice. It was really funny. Revon always loved Edius; I think that he was his favorite. He said he was a fantastic person.

Alright, y’all. Stay inspired, keep on fiddlin’, check out that recording. Hope to see you soon. Thanks.