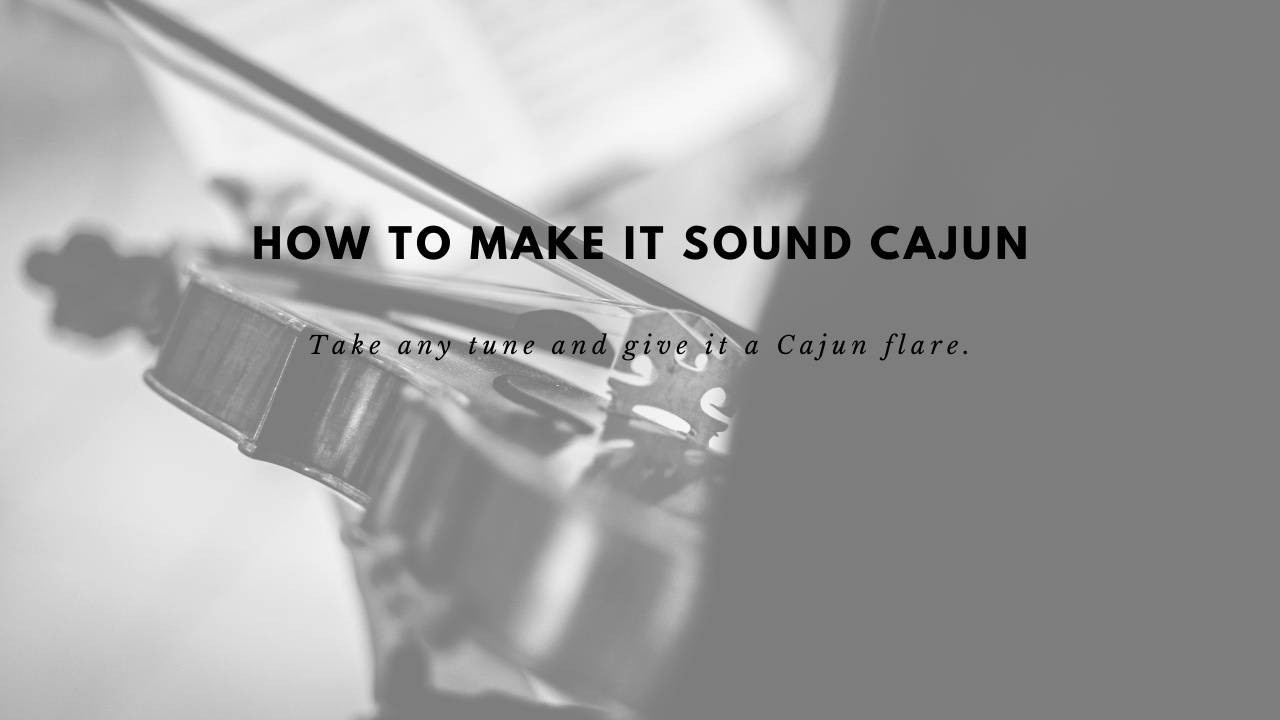 How to Make It Sound Cajun

Hi, I’m Mitch Reed. My vlog this week is on how to make things sound Cajun, what kind of ingredients or spices to add to any standard melody and give it a Cajun style. So that’s a good question. A lot of people have been asking about that and so we can use a couple of real standard tunes as an example. I think what gives Cajun or Creole fiddle its sound is slides for one thing. Of course, taking a note and sliding to it. [0:33] Any slides like that.

The other thing is the double strings. It kind of has that lonesome sound, especially what we call the unisons, which is the same note but one of the notes you slide to meet the other notes for something like this. [0:53] or [0:55]

So things like that you hear in other fiddle styles, old-timey fiddle, bluegrass, things like that, but it's a huge part of the Cajun and Creole sound. If we just take a standard melody... It's the holiday season. we can take Auld Lang Syne. [1:22]
It’s a Scottish song, so let’s give it some Cajun. The first thing I would do is double the strings so… [1:55] You can do an octave right there, and I’m totally taking this from Michael Doucet who did this on the BeauSoleil Christmas record. I was so impressed with that, how he gave a Scottish tune a real Cajun sound. He made it sound like an old Cajun tune if you’d never heard it before. So those are the things there, the double [2:27], that’s an octave there. [2:38] First finger on the A string, the fourth finger on the E. [2:42]
Alright, so again I did a couple of slides [3:18] and then [3:21] with that doubled sound. [3:29] That is one of the main things I think that really identifies Cajun music.
Mr. Dewey Balfa always said that when people would ask him, “what are you doing on the fiddle that makes it sound like that, that other fiddlers aren’t doing?” And the first thing Dewey would say was “I’m always doubling the strings. If I’m playing the melody on one string then I’m catching an open string.” He said that’s part of the Cajun sound. It’s a heavy drone sound. And they do it in other styles of fiddle but in Cajun music, it’s really, really a big part of the sound. So that’s the first thing, and definitely some slides.
So let’s take another one… let’s take something real standard like maybe Amazing Grace…[04:23] I’m losing the melody… I’m hearing Silent Night instead of Amazing Grace. [04:36] I’ve been practicing Christmas songs obviously… so let’s take Silent Night; it’s Christmas time so… [04:47]
So nothing wrong with playing it like that. It’s a really nice sound, but if you want to give it a Cajun sound, let's basically turn it into a Cajun waltz because it’s in 3/4. But the thing about Cajun waltz is it has a shuffle too. It has a continuous kind of bow rhythm. When I think of a traditional Cajun waltz, I always think of this rhythm. [6:01]
So there, again, taking those double strings, some sliding unisons, and just some slides [6:51], I did a kind of interesting slide, [6:55] stuff like that gave it some blues. So then all of a sudden you have what sounds like a Cajun waltz.

I’ll leave you with one. This is another fun one you can take. A lot of people ask me about Jingle Bells. It’s Christmas time and… really the thing with Jingle Bells is to give it a shuffle. [7:22] You know if you give it that shuffle, [7:29] that’ll also turn it into a fiddle tune.
So yeah let’s end with this one. [7:45] So to Cajunize it... [08:43] So one of the first things I think is doing the walk-downs and walk-ups. That's real common in Cajun waltzes with the accordion and the fiddle. So instead of holding a note out like [09:21] that note right there is held long so instead of just holding it long, do a little walk-up or walk-down. [09:33] This one, too [09:44], you could do [09:47]. So I’m just doing a little Cajuny walk-down.
So anyway, just throwing you some examples out there just what you can do around this holiday season. Have some fun, Cajunize some tunes; it doesn’t have to be Christmas tunes. It can be whatever, little standards, ones that people know.
I think the one that’s a good one, too, is You are My Sunshine. [10:23] Whatever key you want to do it in. [10:26] So to Cajunize that, again that shuffle bowing. [10:51]
I did that one in F and again, just doing those same things like doing [11:49], doing some octaves, sliding some unions [11:55], kind of hit that Cajun bouncy bow, not bouncy bow but kind of find that rhythmic style. [12:04] So it’s a lot of fun.
Have fun with the fiddle. That’s how you keep loving it and putting up with it 'cause you can have days with it where it drives you crazy. Definitely have fun, don’t take it too serious. Stay inspired, play every day. You want to mess with it every day- that’s the key. Hope this gave you a little bit of inspiration and some ideas.
So thanks for joining me today and hope to see you pretty soon! If you want to check out my website MitchReedMusicLessons.com, I will break down some Cajun Christmas stuff and there’s a ton of traditional Cajun and Creole tunes for beginner levels and intermediate levels. Alright, thank you so much! Have a wonderful day.