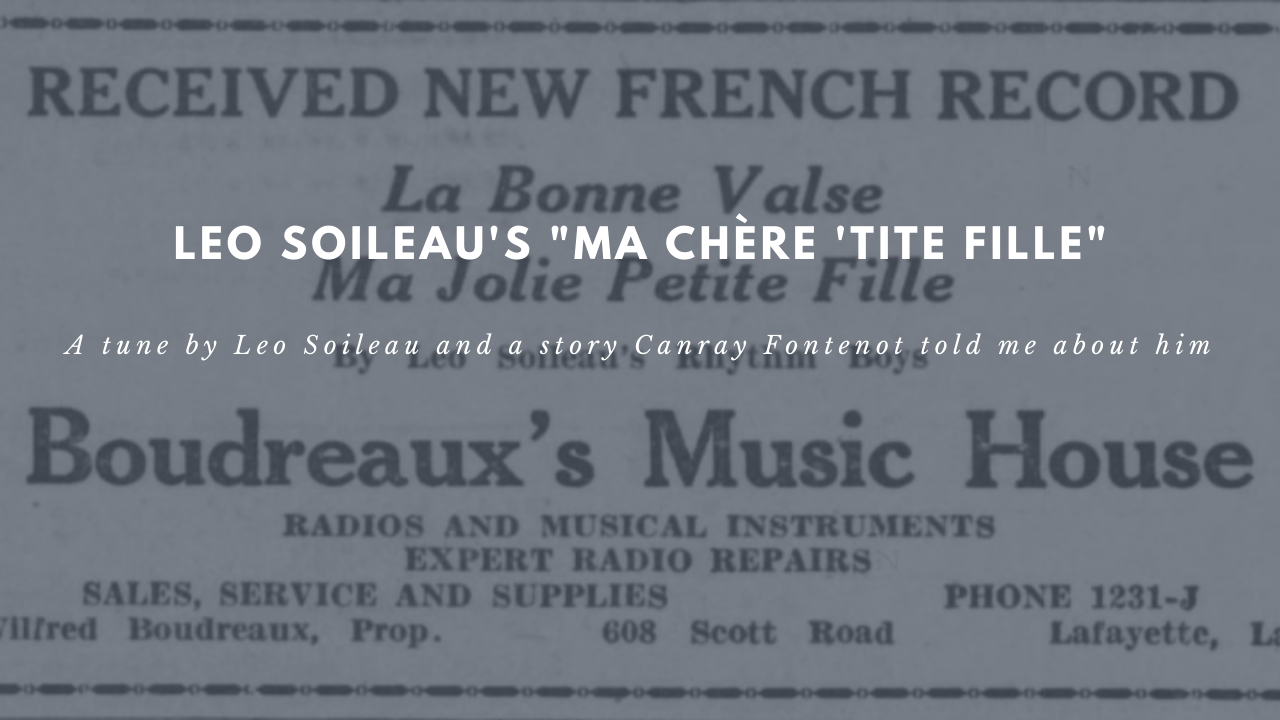 Hi, I’m Mitch Reed. Welcome to my vlog and my vlog today is on a tune that I’ve been listening to played by great fiddle master, Leo Soileau. So, Leo Soileau, his name is not spoken a whole lot. He’s not as famous as maybe Dennis McGee, but he had a huge influence on Cajun fiddle and started off very, very traditional playing in almost the same style as Dennis McGee. And then he heard swing music that was coming from East Texas and he became very inspired by swing music and almost overnight became a swing and Cajun fiddler. And was one of the guys who taught Harry Choates how to play swing fiddle as well. So Leo Soileau was from Ville Platte and he recorded originally with Mayuse LaFleur, who was a great accordion player. He wrote a tune called “Chère Mom” or “Hey, Mom” I think.

Mayuse Lafleur was killed at a young age. He was shot accidentally just trying to break up a fight. So Leo had to find a new accordion player. So he went down to Arnaudville and he met Moise Robin. And they started playing house dances and then also recording 78s together. And just a really interesting guy. You know, there’s a lot of stories. Actually, the most Leo Soileau stories I heard were from Canray Fontenot. And he was Canray’s fiddle hero was Leo Soileau. So yeah, a lot of great fiddlers from the Ville Platte area. It seems like that was a hotbed for Cajun fiddling and Cajun music in general. But you also had people like Austin Pitre who was a fantastic accordion player, but a great fiddle player.

So this tune is not that played that often and I think it’s just such a great fiddle tune. You do hear some accordion players play something like it, but I think it originally started out as a fiddle tune. So I actually forgot the title. I’ve been playing it, but it’s called “Ma Chère ‘Tite Fille”, “Mon Chère ‘Tite Fille”. So Leo Soileau. And it’s on the Leo Soileau CD, the collection of 78s that you can get. I believe it’s on Yazoo label and you can get it on iTunes. So I’m just gonna play it and it goes like this… [02:43].

Alright. A good old tune from Leo Soileau from Ville Platte, Louisiana. One of the interesting stories that Canray Fontenot told me was that when Leo Soileau got into playing swing music in the mid-thirties, he hired this young kid, maybe 15 years old or something like that, and it was Harry Choates. And he hired Harry Choates to play lap steel in his band and Harry Choates had only been playing the lap steel for maybe a year. And he was fantastic. He was the best in the area. And after playing with Leo Soileau for six months, he asked Mr. Leo “Could I borrow a fiddle?” He said, “Do you have an extra fiddle that I could borrow? I think I want to learn how to play the fiddle.” And Leo said, “Yeah, sure, I’ll bring you a fiddle if you want to borrow it.” He said, “But fiddle, it’s hard. It’s a lot harder than that lap steel. And it takes years, many, many years to learn. So be patient.” He brought him to fiddle.

About six months later Harry Choates asked Mr. Leo, “You think tonight at the dance we can play some twin fiddles together?” And Leo looked at and he said, “Well, wait, I gave you that fiddle just six months ago.” He said, “There’s no way you’re ready to play twin fiddles with me at the dance.” He said, “You know, maybe you can play some chords, but I don’t think we should do that. I don’t think you’ve been playing long enough and Harry Choates said, “Please, please, I’m telling you I can play.” He said, “Just give me a chance.” So Leo said, “Alright, but if you mess up right away, I’m going to pull the cable. He said, “We’re going to turn the amp off” and all that. So they started playing the dance and sure enough, like midway through the dance Harry Choates got Leo’s fiddle and they started playing some swing music together, twin fiddles, and Harry Choates was just phenomenal. He was so good that he was actually out-playing Leo Soileau. And when they finished, Leo got kind of mad about it and he said, “You know what, I need that fiddle back. You have to give me that fiddle back, I need it.” And Harriet was like, “Oh, okay.” So you know, in the old days there was a lot of jealousy towards other fiddle players and that kind of thing. But Leo Soileauwas very threatened by how quickly he had picked up the fiddle and it was all about being the best fiddle player. That was the title that you carried with you when you had a Cajun band back in those Cajun swing days.

So of course, Harry Choates went on to become this phenomenal swing player. So good that he joined Bob Wills’ Arkestra and moved to East Texas and played with all the big shots over there. But just remembering Leo Soileau and how fantastic he was and how productive he was about recording in the 1930s. And the great recordings that he made with Mayuse LaFleur. And the ones with Moise Robin, just fantastic. And how his style changed from what we’d call traditional or old-timey Cajun fiddle to more Texas swing Cajun music. So hope you enjoyed this. Stay inspired. Keep on fiddling and I’ll see you soon. Thank you.