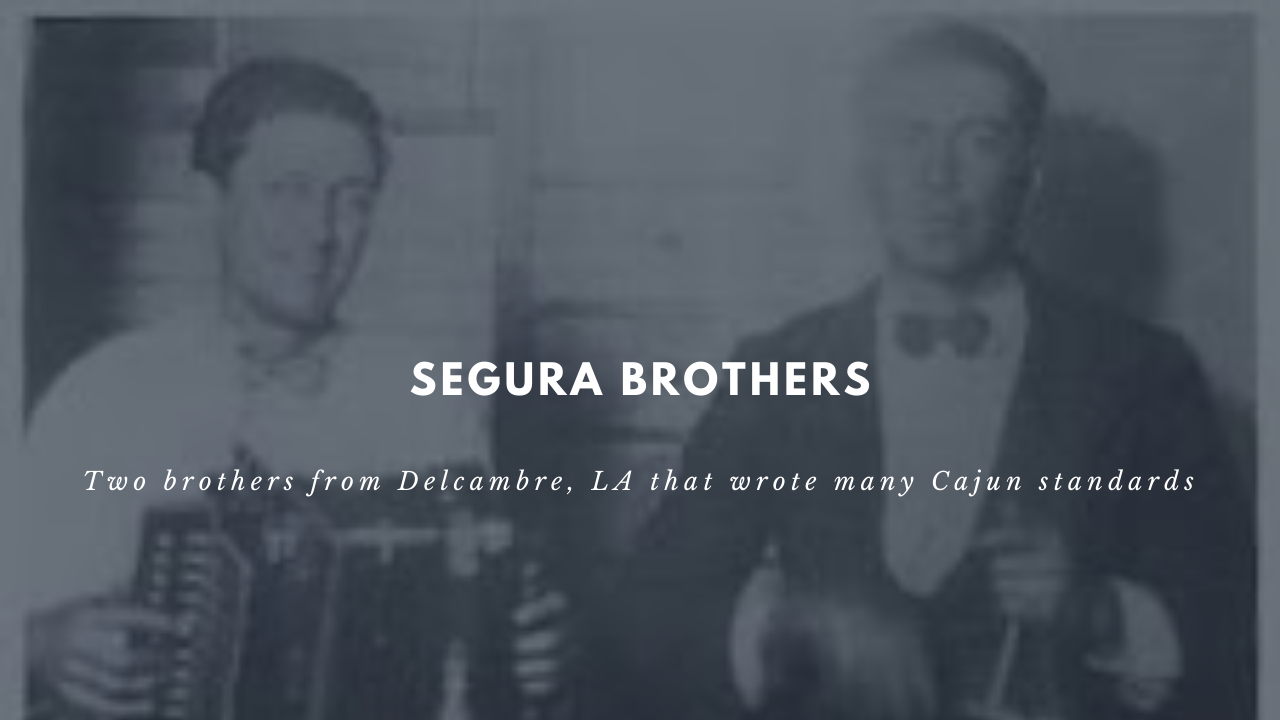 [0:01]
Alright! That was a tune by the Segura Brothers, two brothers from Delcambre, Louisiana. What was interesting about these guys is they were really some of the first guys to record on 78s, just after Allons a Lafayette was recorded in 1929. So there were two brothers. Eddie played the triangle and his brother Dewey was the accordion player and they both sang. I think Eddie sang most of the tunes but it’s kind of an interesting sound because there’s the triangle and accordion, no fiddle at all but I’ve turned them into fiddle tunes because I love their music.

Dewey would run whiskey. In 1928 he was running whiskey to Port Arthur, Texas from Louisiana. He read a newspaper article that they were recording Cajun music in New Orleans, that Columbia Records was recording music in New Orleans and he actually happened to have family that knew some of the people with Columbia Records. He really pursued Columbia and tried to get them to give him a chance to record. It ended up happening and they recorded two tunes. They recorded Bury Me in the Corner of the Yard. And the one I was just playing was actually Mosquitoes Ate my Girlfriend, a slightly different version than Nathan Abshire’s. Really interesting stuff.

The one that he calls me Bury me in the Corner of the Yard is also like another tune that might be more known as Allons a la Tortue which means Let’s go to the Tail of the Turtle Bayou. There was a bayou around Henderson in the basin that was called Tortue. So let’s go there and fish… catch some fish, some sacalait.

So I’ll play that one now. Segura Brothers, interesting guys. And they are on iTunes; they’re also on YouTube and you can Google them as well. So the two brothers are Dewey and Eddie and they were some of the first Cajun musicians to record from Delcambre, Louisiana. [03:49]

All right, the Segura Brothers! Some of the first guys to record those tunes in 1929 was the year so just two interesting guys that good friend of mine. Shoutout to Smith who’s an awesome fiddler and fantastic researcher and young fiddler that’s interested in a lot of the really obscure stuff. So go, Smith! Help me save Cajun fiddle! So anyway, stay inspired, keep on fiddling. If you like this stuff check out my website. I break down all this stuff so if you’re a beginner fiddler, intermediate fiddler, advanced fiddler, you’ll get something out of it. It’s all tuned down Cajun-style so have your fiddle tuned down. It’s mitchreedmusiclessons.com and you can become a member and you can learn over 200 tunes on there. You can learn everything from Creole fiddle to Cajun standards and also a lot of the obscure fiddle tunes like Varise Conner and a lot of Dennis McGee stuff. Thank you so much for joining me today. Keep on practicing, keep on fiddling, stay inspired and I hope to see you out there soon. Thanks so much!