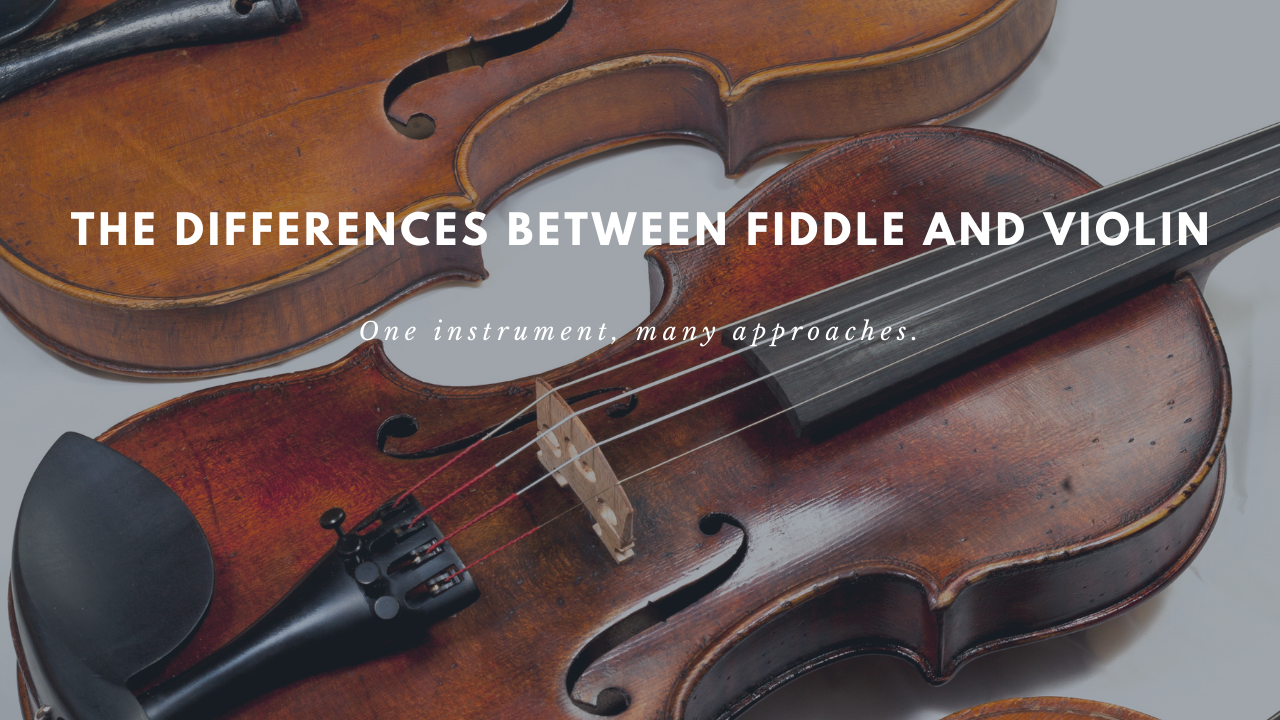 The Differences Between Fiddle and Violin

Hi! Today on my vlog I’m going to talk a little bit about something a lot of people ask me about, questions about, and it’s the difference between violin and fiddle. So I thought I would give it a try. I’m not a violinist, I’m a fiddler. I did study classical music though when I was a kid. I played cello and the first part of learning the fiddle was really violin. I studied Suzuki violin. So I still really enjoy playing some of those tunes, some of the Bach minuets, and things like that.

So the first thing I guess to talk about is just holding the fiddle. It’s really best to learn to hold the fiddle right like the way a violinist would hold it. So I always say, you know, the main thing is having the fiddle always sticking straight out like that [00:52]. It’s easy sometimes to get lazy and have your fiddle down here and hold it up with your left hand. But really, if you try to follow the rules of holding the violin the proper way, it will really help your left hand, it will help your intonation and your technique of your left hand. So that is important.

Then the other thing too is the bow.; holding the bow the right way. But going back to fiddle, I learned from a lot of old guys that weren’t able to take violin lessons or fiddle lessons and they just had to learn by watching someone around them play and so there were a lot of crazy ways of holding the bow. The way I hold the bow is I hold it like this [01:35]. I put my thumb kind of between the frog and the grip and then my fingers like this. But I learned from guys who held it up high like [01:45]. So this would be more violin, I’m sorry, more fiddle. They would hold it up high, up like this [01:49]. Even some people holding it with their fingers in the bow like this kind of thing [01:56]. So pretty wild ways of holding the bow and the fiddle as well. I learned from a guy who would hold the fiddle like this [02:03]. So he would kind of push the violin against him and really keep it steady that way. I knew a guy that held it like this [02:14]. This was very strange. I wasn’t sure if he was doing it because he could hear it better, but he held it like that. So that was kind of interesting.

So basically, when you talk about the fiddle, there’s really not a lot of rules. Most fiddle players will find somebody to study or somebody to learn after and just mimic other fiddle players, watch what they do, and try different things and see what they like. But violinists study with a strict teacher for a long time who constantly corrects their posture and their technique and the way they hold the bow and for a good reason because if your goal is to end up in an orchestra, you’re playing with another ten violinists and you don’t want to stand out with some weird way of holding the fiddle or the bow and you want to really match with what everybody else is doing. So that’s a little bit about just holding the violin versus the fiddle.

It’s the same instrument. I remember my teacher used to say fiddle sometimes and sometimes he’d say violin.; it’s the same instrument. It just depends on what you want to call it. The Cajuns, in French we call it la violon, so they would call it the violin, but when they would talk about it in English they’d call it the fiddle. So main thing about fiddle I find is that you’re playing the melody on one string and you’re catching another string as an open string or what I call a drone string. So you’re bowing two strings. When you’re playing a melody on one and the other string is just ringing out to harmonize with that melody. So it’s like…and you can play anything [04:03].

But you are always doubling everything with a drone string or even sometimes using two fingers or one finger barring across two strings to create a chord or some kind of harmony. Violin, you find more single strings, you know [04:31], that kind of thing.

So I’ll play a little bit of Bach, I’ll play a little minuet and then I’ll play a fiddle tune so you can kind of see the differences but also the similarities. Baroque music came out in the 1600s, and as the violin spread across Europe, it eventually made its way to the New World and it got into the hands of people who didn’t study violin. But they knew folk music and other instruments that they played their local music on, and they converted that to violin. So yeah, let me play this minuet. I think this is called “Bach Minuet Number Three” I believe…[05:19].

So a lot of fun to play and you can totally approach it like a fiddle tune. It has two parts: A part, B part.

Arpeggios, that’s the big thing in fiddle music, especially old Cajun music and Creole music. You still find a lot of arpeggios and that was really what so much of Baroque music was based on, like that last tune. But you find that also in Cajun music. So just to play you a Cajun tune, one of the tunes, where the arpeggios are just right in the beginning, is the way the Balfa Brothers play Madeleine which is like this [07:03].

Dennis McGee too has a lot of things that I found had Baroque qualities to it. One is the one he called One Step d’ McGee with just that A part…[07:51].

So that could be totally something out of a Suzuki book. But that’s an old Dennis McGee tune. There’s so many of those patterns you find both in baroque or classical music and you find in old, old fiddle music.

Now, what happened in Cajun country in maybe the 1920s, 30s, was swing started to be a big influence. That’s when the shuffle bowing started. So that’s that thing that really defines fiddle music, when you hear that shuffle bowing…[08:51], you know, that kind of thing.

So that started to happen in Cajun music and when that took off then the old reels and contradances and things like that, that did have some baroque influence, they kind of died out. But there is a connection between the two. Not so much anymore though. It seems like it’s getting further and further apart.

So just wanted to talk a little bit about that, the difference between the two kinds of music, and I’ll leave you with a tune. This one is really interesting to me. It’s a tune that Dennis played and he just called it Mazurka. But to me, there’s a lot of things in here too that I hear, you might hear in Bach, or in Baroque music, early Baroque music. So it goes like this…[09:50].

Alright! Thank you so much for joining me at my vlog and check it out some more. Let me know if you have any comments or any suggestions on what you’d like for me to talk about, too. Alright! Have an awesome Christmas and I’ll see you soon. Thanks so much.