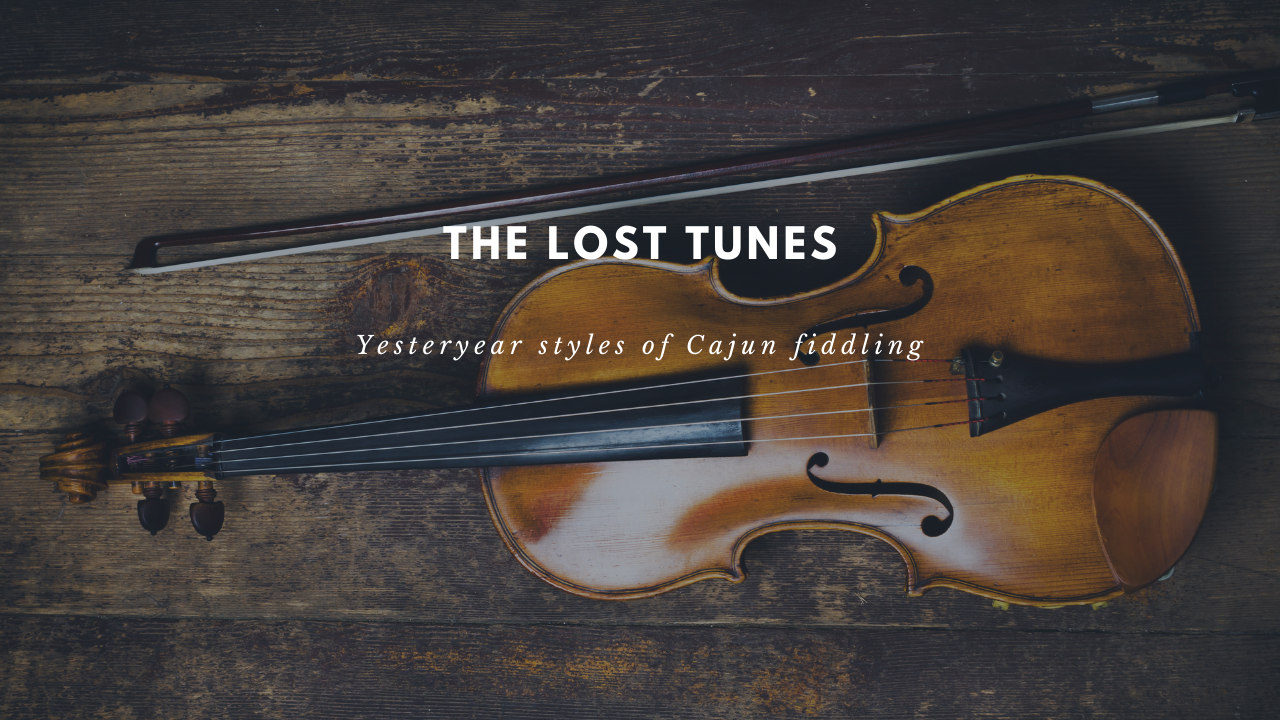 Hi! Welcome. My name is Mitch Reed and I’m gonna talk a little bit about what I call The Lost Tunes. The reason I’m bringing this up is I was gonna break down some tunes this week on my website. I have tunes you just don’t hear that much about and one of them is Galop which is a type of fast dance tune, like a two-step or a reel. I think one of the most famous tunes that has that word in there is Tit Galop Pour Mamou by the Balfa Brothers. I’ll play a little piece of that and then you can see some of the styles of the other galops that I’ll be breaking down. So this is Tit Galop Pour Mamou, Balfa Brothers…[00:50]

So I find in the A part of Tit Galop Pour Mamou that style you also find it in these other galops. So the second galop is one that Dennis McGee played. He didn’t have a name for it, he just called it Galop and it goes like this…[1:50]…So kind of an interesting little tune there, too.

The third one is Wade Frugé had a galop so I’ll play Wade Frugé’s Galop and it went like this…[2:25]…So really unusual styles but fun to play, a lot of fun to play. The reason I like talking about this stuff is if you’re really into traditional Cajun fiddling, there’re definitely tunes that you wanna learn just to preserve Cajun music, to help preserve it, because these aren’t tunes that we have recorded and that we once played but you might not hear them in jam sessions or at a dance because they’re just old styles of dances and they’ve died out, you know, pretty much, but there are still great tunes to play.

I was also gonna talk about the polka. When I was young I was really lucky and able to study with some old fiddlers and one of the guys I studied with was Adner Ortego from Grand Prairie and he had a polka that was in his family and it was called the Ortego Polka and I think it was written by his grandfather and then it passed to his father and then onto him. And so those are really fun tunes as well so I’ll play the Ortego Polka and it goes like this…[4:18]

Alright. Dennis McGee had a polka too. I only heard him play one polka but I thought it was kind of interesting too. I’m really putting myself on the spot because I don’t know if I remember this but I’ll try and so it goes…[5:18]

Something like that, hahaha. So anyway that’s polkas, pretty interesting. They also play polkas…There were two brothers from New Iberia called The Segura Brothers and they played some polkas. I thought it was really interesting. I found that what they called polkas sounded almost like hornpipes to me, Irish or Scottish hornpipes. And let’s see if I can play some of that just to show you…[6:24]…Alright, so that’s a little bit of polka from New Iberia.

The last thing I want to talk about is kinda interesting. A lot of people talk about or ask me about it, I learned a lot of mazurkas from Dennis, and people would ask about mazurkas. I don’t know much about it. It’s a waltz. The only way I think I would describe it is the mazurka seem to be a little bit more note-y with a little bit more ornamentation whereas the waltzes have a little bit longer notes and more of a bowing rhythm, more of a bowing shuffle kind of to them. So I’ll play a mazurka and then maybe I’ll just play a straight waltz just to kinda show you the comparison, it helps. So here we go. Here’s a mazurka from Dennis McGee…[8:15]…Alright. And then I’ll play more of what we call a Cajun waltz, a straight Cajun waltz…[8:57]…

So both 3/4, you would probably dance to them the same way you know but maybe a long time ago they didn’t. Maybe they danced to the mazurka differently than they would’ve danced to a waltz.

So it’s all interesting stuff. Just putting it out there, think about if you like the old music, collecting old recordings, you will come across this stuff. So I thought it was just fun to talk about it.

The last thing I’ll just mention is one-steps which again are fast tunes, they are like two-steps or reels, but I’m sure people did a different dance to them. My idea would be that in the old days when you go to a house dance, fiddlers would play one steps, they’d play reels, they’d play mazurkas, polkas, mix it all up you know and maybe the two-step was more of modern dance that came from Texas later on. But I’ll play the one-step, I’ll end it with this one and this is a great tune by Dennis McGee. It’s just called Happy One-Step, and it makes you happy so…[10:54]

Alright so yeah! Kind of interesting stuff out there: galops, mazurkas, polkas, one-steps. A lot of people ask what’s different about those tunes than the more common two-step? Waltz? Now you even have specials you know like Lacassine Special. Again they’re all in the same timing like a special, or a breakdown is like a two-step. But I would think possibly maybe people in the old days danced differently and that’s why they gave them those titles or they were just trying to change it up from the same boring titles like “Two-Steps” or “Reels” or whatever and just gave it a different title so it could be that too possibly but…I love the old music, I love listening to 78 recordings and I also love talking to old people that remember going to the house dance, not the Honky Tonk, but the actual House Dance days you know, 1915, 1920, 1930. Of course, there’s nobody really around from that time but any kind of story you could get from people, stories that have been passed along, to me, is very very interesting.

Yeah! Have fun with that stuff. Good luck and let me know what you think. If there are any weird tunes out there that you find let me know, send a request, and then you know I can break them down or at least talk about them on another vlog.

So thanks so much for joining me today and keep fiddling, stay inspired, and have an awesome day.