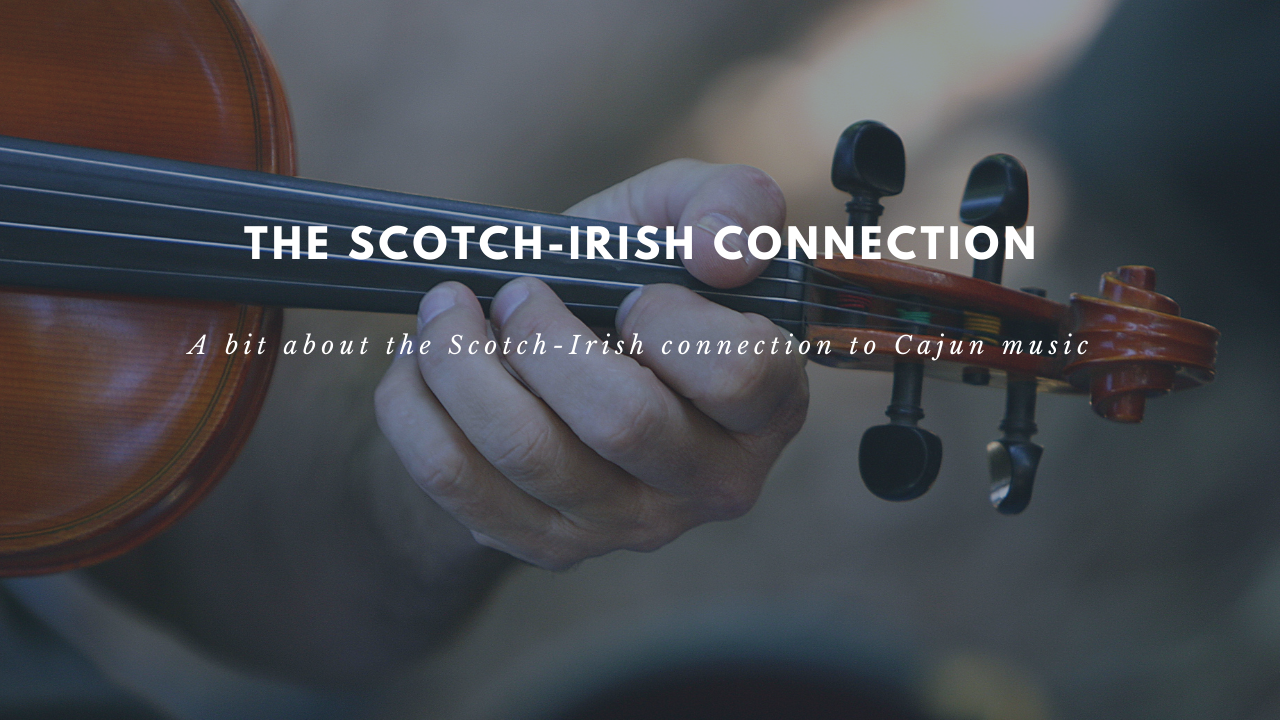 It’s the week of St. Patrick’s day and I thought it might be a little interesting to talk about the Irish influence in Cajun music or some people call it Scotch-Irish, Scotch-Irish being more of the people who settled the Appalachian mountains from Northern Ireland. And, we also did have a lot of Irish that came here, to Louisiana, during the Spanish land grants when Spain owned Louisiana, the two Lieutenant Governors back to back were Irish and they were able to help some of the Irish rebellion at the time get away from England, and save their lives and send them this way.

So who knows where it all comes from? But I thought it would be fun just to talk a little bit about it. If you listen to some of Dennis McGee’s tunes, they sound very Irish and of course, his last name was McGee and there are many, many great Irish Cajun fiddle players Varise Conner people like that. So they all spoke French, and they’re all Cajun but definitely had Irish roots. So I thought it would be fun…I’m gonna play a tune. This is a great tune that really, to me, represents the connection with the Irish fiddle music and the Cajun fiddle music and it’s an old reel that Dennis played and I did break it down, I believe I did, it’s called Reel De Coquin and it goes like this…[1:40]

Alright. That was just fun. That was Reel De Coquin, it’s a Dennis McGee reel. And then I went into Drowsy Maggie, which is a very standard Irish reel, and then I ended that third one, was a Cheese Reed tune called the Empty Bottle Stomp. So two Cajun tunes and an Irish tune in the middle and it’s fun to do that.

I did have a little band for a while and we still do get-togethers. It’s called Celjun with Tony Davoren who’s from Ireland and lives down here in Louisiana and we did that, me, Tony, and Anya [Burgess]. So it’s a lot of fun. You can hear the connection and of course, if you travel up north-east of here you get in Appalachia and a lot of people that came to Louisiana during the Spanish Land Grants were from the Appalachian mountains. People like my family, like the Reeds, the McCauleys, the McDaniels. You had the Balfa Brothers…The Balfours…before they came down here they were The Balfours. So there’s heavy Scotch-Irish-Celtic influence in Cajun music and it’s fun to talk about it. If you get any interested in learning any Irish tunes or old-timey tunes you definitely see the connection, the relation between those so it’s a lot of fun.

This week I’m gonna break down two reels that I thought would just kind of go with the theme of St. Patrick’s day and the first one is a reel that I learned from Billy McGee, Dennis McGee’s son and taught me this one and it’s called Reel de Marcantel. I’ll just play a little bit of it but this is a nice reel, too…[6:25]

So I’ve had a lot of people ask me, “What is the difference between a reel and a two-step?”, which I think is a really good question. I usually find that Reels tend to be older, like when Dennis McGee would play a reel, just judging by the nature of the tune it seemed to be kind of an older tune and two-steps seems to come in more with the accordion, maybe the influence of the Texas Two-Step, East Texas in our music. Reels tend to have patterns that go up and down so I’ll give you a good example, this is a good Reel, it goes like this, it’s a Dennis McGee…[8:07]…So there are little patterns like that…[8:27]

It’s really interesting though. Cajun music is very interesting when you start to bring up the Irish influence, the Scotch-Irish or Celtic thing because it’s definitely in there and it’s definitely mixed with the African and African American culture or music. The slaves that were brought to Louisiana definitely heard these old reels and things like that and did their own versions of them and made them syncopated and one of the tunes that brings to mind and sounds so much like a reel and could even be like an Irish reel but Dennis McGee called it a juré which was more of an African influence call and response song and it’s the one that he just calls Adieu Rosa. So the first part is so much like a reel so it goes like this…[9:23]

But it’s also very bluesy. So that’s a really interesting tune I find that really combines the two influences there, the Irish influence and the African or African American influence.

So the other tune I thought would be fun to break down this week, I was gonna do this for the Intermediate and Advanced players, was a Reel that Dewey Balfa wrote and I think he wrote this shortly after his brothers had tragically passed away in a car wreck. He was really having a hard time with playing music again without them so he turned to the help of Tracy Schwartz and Peter and they influenced him a lot and you can hear almost Appalachian. Maybe he took a break from the Cajun stuff to get over his brothers and got a little bit more than the Appalachian style. But this is a tune that he wrote that I love, everybody loves it…he called this the Watermelon Reel…[10:52]

So that is another great reel that’s a lot of fun to play and it’s very funky, very syncopated and I hear Irish but also Appalachian influence, and of course, Dewey Balfa just had his style.

The other question people have asked me too when we bring up the subject of reels is the ornamentation. So they definitely have a little bit more ornamentation maybe than a two-step would have. Mainly what we use, what I use, this is what I do, I tend to do hammer-ons which are this…[12:35]

So you are basically holding one finger down like I have a first finger held down but I’m taking my second finger, and the reason I like to call it a hammer on cuz it makes sense, I’m coming down with my second finger like a hammer. I’m coming down with it but I’m going right back up. So it’s like a rhythmic, kind of like a rhythmic beat that you are adding on top of a note that’s already existing. So the first finger is just this…[12:59]…And then if I add the hammer on…[13:04]

You kind of have that in Cajun music. More of the older players that played, people like, of course, Dennis McGee. And they did kind of like a little roll and they went…[13:54]…You know, that kind of thing…[13:56]

So those are ornaments and all they are is they are just ways of decorating a note, giving it some rhythm and things like that. But there are definitely ingredients that make a tune more of a reel let’s say than a two-step and I just thought it would be fun to kind of share that. Of course, it’s my view of things, not everybody might agree on this stuff but I love Celtic music, I love Irish music. I was very influenced by Irish music and I heard Cajun music my whole life growing up around my family in Mamou and then my family in Lafayette. My dad collected Cajun records and I was never really that interested in it. I was just like any kid into rock & roll and that kind of stuff.

But then I bought an Irish record of a group called Planxty when I was about 12 or 13 and put that record on and started listening to it and then right away saw the connection like, “Wow! There’s things in this that sound like Cajun music!” So definitely got me into appreciating what I had right here under my nose. My dad was play accordion and collecting Cajun records so I think the first record that I really got into was Octa Clark and Hector Duhon. But as soon as I got my hands on a Dennis McGee record then it was on. I made the connection between my Irish music that I loved and Cajun music and really that’s why I play Cajun music. It’s because of people like Dennis McGee and the Wade Frugé…those guys, the old guys.

Thank you so much for joining me today. I just want to share a little bit of my view on the difference between Cajun music, Irish music, but also the connection that we have with Appalachia, Scotch-Irish music, and also music from Ireland.

I did leave out one thing and it is another element. We do have our cousins in Nova Scotia, which is New Scotland and they would definitely influence and still are. If you go up there and you run into a fiddle player that might be a Cormier or a Comeau, they’re gonna play some reels and they tend to be Irish or Scottish.

Then you also have the Cajuns that came from the west coast of France, Poitou, and Brittany, and Brittan is a Celtic part of France. So you have a lot of Celtic influence coming in a lot of different ways.

In fact, I’ll leave you with a tune that I learned from a French Canadian fiddler and he called this tune La Sorciere, The Witch, and in Ireland, it’s called Julie Delaney and I’ll play this one for you, and just to show you how it’s a French tune in Canada but its origin is really an Irish tune. So it goes like this…and thank you so much for joining me today, and keep fiddling, stay inspired, happy St. Patrick’s Day…[17:20]