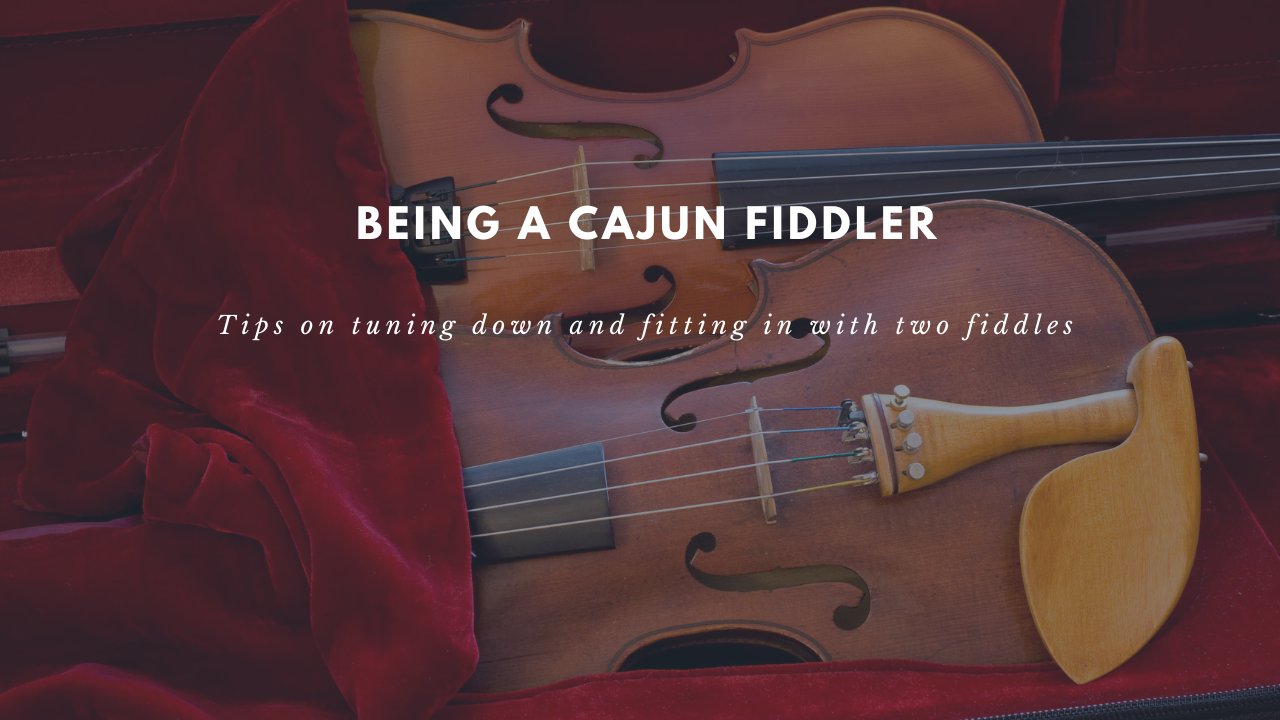 Being a Cajun Fiddler

Hi, I’m Mitch Reed and today my vlog is on being a Cajun fiddler and tips for you future Cajun fiddlers. Just tips on how to be a fiddler who tunes their fiddle down but also how to fit in with other styles of music like if you go to a jam and they’re playing old-timey music, or Bluegrass, or Country music. And really the ultimate secret lies in owning two fiddles. So I thought I would share this with yall today because I get a lot of questions about this and it’s usually people who aren’t from Louisiana that ask me this question. What do you do? How do you tune up and down? What if you play another style of fiddle, is it good for your strings, all this stuff. I mean, does it mess up your strings? Yes, it does.

The key is owning a double fiddle case. I’m going to show y’all what mine looks like. This is a double fiddle case right here. And it looks like this. It’s not much bigger than a regular case but I can fit 2 fiddles in here. What’s cool about this is that is what I go somewhere to a jam, like living up here in Maine most fiddlers all tune standard. Nobody tunes down but I do play Cajun music and I do play with some Cajun musicians that live up here like Jim Joseph and Pam Weeks and Rob Sylvain Jr., Junior Stevens… So they have C accordions so I do have my tuned down fiddle but I also have my other fiddle in case we play some Irish tunes or French-Canadian tunes or New England tunes so the thing is to have one fiddle tuned down and one fiddle tuned standard.

Usually, I think most of the time when I talk to people about this they’ll say well I can’t’ afford to get a second fiddle. It’s very common you’ll have people who maybe spent a thousand dollars on a good fiddle, a decent fiddle. And they feel like well to buy another fiddle that’s another thousand. And no, you don’t have to do that. That’s why I wanted to share this today. Most Cajun fiddlers, especially the old traditional guys, didn’t own really expensive fiddles so we’re not talking like violins you’d find in the symphony or anything like that. A lot of them ordered their fiddles on in the Farmer’s Almanac also like Wade Fruge talking a lot about great old-time Cajun fiddler who I think paid five dollars for his fiddle, you know what back in the 30s or whatever. Through the Farmers Almanac, he ordered this fiddle and so most of those fiddles were factory-made, they weren’t all hand-carved, I’m sure.

I always say get you either two decent fiddles, maybe in the price range of $500 to $600, or get you a really nice one and get one for like $300 or $400. I actually did this for many years. I played a fiddle that was not that great. It was a Romanian fiddle but I paid $300 for it and actually, you can still get this fiddle. I brought it to a luthier and had them kind of tweak it a little bit, kind of upgrade it. They put new strings on it, better strings, a better soundpost, did some adjustments, better bridge, things like that. Right away it went from a $300 fiddle to probably $500. I usually tell people if you own a fiddle and you’re trying to figure out should it be your cajun fiddle or your standard fiddle, the first thing to do is tune it down and see how it sounds. If it sounds really sweet and good, awesome. It’s probably going to work! If you tune it all the way back up and you like the way it sounds, leave it tuned up. Figure out which one you like better. If you like the way it sounds tuned down, make that your Cajun fiddle.

To own a good standard fiddle, it doesn’t have to be expensive either. You can get a $300- $400 fiddle, tune it standard, put some good strings on it and have it fixed up right. This is what I do. I’m poor, I’m a musician, I don’t make a lot of money. Most of my good instruments are actually given to me by people. People that appreciated what I did. And said, “look, you know this instrument’s just gonna stay in a closet so I want to give it to you.” So ‘thanks’ going out to Father Breaux for a fiddle that he gave me. I do have two decent fiddles; I have a $5000 fiddle and I have a $1200 fiddle and I love them and as far as right now, I will never need to own another fiddle in my life. I leave the $5,000 one standard because the tone is amazing. The one I got from a luthier in Minnesota I tuned down so that’s my Cajun one. That’s this one here. I put them both in my double fiddle case. Everywhere I play, I have my two fiddles and I have a couple of bows. I always recommend getting two or three bows because it's just good to have them. Bows are different. I have a light bow, a heavy bow, a medium bow. Sometimes when I want to play something really soft and gentle, I’ll play my light bow. If I’m playing with an accordion I really want to dig in and be loud I’ll play with my heavy bow. That’s kind of my set up right there. Two fiddles, one tuned up, one tuned down. It works really well because when I get to different jam sessions I can have this whole range of keys that I can play in. And the thing is I’m always able to get the open string drone so that’s the whole purpose about tuning up and down is that you can get an open C string or an open F. If I go to a jam and they’re playing Country tunes in the key of C I grab my Cajun fiddle even though it’s not Cajun music, you know it makes it easier. Most of the stuff up here in New England is an A and D and G so I usually play my standard fiddle for stuff like that but Folk tunes, Cajun tunes, early Country tunes, a lot of that stuff I play with my tuned down fiddle.

If you live somewhere out of Louisiana you may not have heard about this concept of getting a double fiddle case but it’s really popular in Louisiana. If you go to a music store or a violin shop in Louisiana, they’ll totally recommend it- “Oh get a double fiddle case.” You can order them online and they’re super easy to find. They don’t cost a lot; I think I paid $80 for mine or something like that. So that’s what I recommend. I just wanted to do a vlog about that, just to share that, you know what I do in my situation. And share that with you, pass that on to you so it is important to have two fiddles I think and it’s really hard to have one fiddle and tune it up and down and up and down because you’re gonna wear out your strings. You’ll end up breaking a string. It’s just not good for your fiddle. It doesn’t cost that much more to get you a second fiddle either- tune it standard or tune it cajun.

I hope I covered all the details of what some of y’all have been asking me and the questions and stuff like that I appreciate so much. Y’all subscribing to my channel here on YouTube. Check out my website where I break down tons of Cajun tunes and Creole tunes and talk about the history and origins of the tunes. Again, thanks so much for supporting this, and good luck and stay inspired, keep on fiddlin’. Thank you!