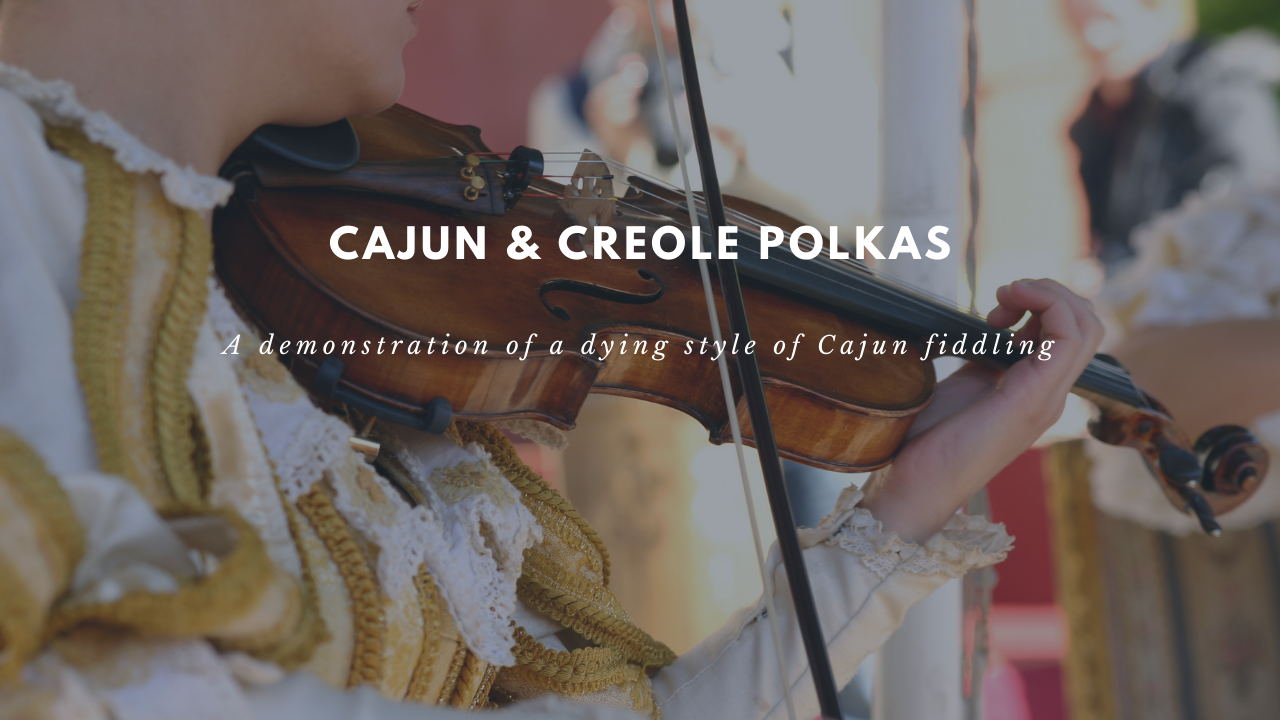 Hi, I’m Mitch Reed and today my vlog is on the Cajun & Creole polka. Definitely a type of dance that has died out down here in Louisiana. I don’t know anybody who can dance the Cajun polka or Creole polka. But it definitely was played and the old people that were recorded playing it, the oldest Polka that I’m thinking of right now was played by Dennis McGee on the fiddle. But also, if you have the record of The Carrière Brothers, they play a polka on there as well, and there was an old ’78 recording of a polka called The New Iberia Polka. So I just want to talk a little bit about that and I actually wanted to play those polkas and just give you a taste of what they sounded like and play them for you slow too, where you could maybe pick them up. So let’s start with Dennis McGee, he just called this one Polka and I’ll play that one first. And they are all very unusual but a lot of fun to play because they are so different from a Cajun two-step or a Cajun waltz and even a reel. So here we go…[1:17]

So a polka in B-flat by Dennis McGee. I don’t really know that much about that tune. We all know that Dennis McGee was born in the 1800s and learned fiddle tunes from a guy who was 100 years old when Dennis was like 16. So I’m sure he played more than one polka.

So the next one that I thought was interesting was two brothers from New Iberia that recorded a ’78 recording and it was an accordion and a triangle and they recorded a lot of tunes, a lot of interesting tunes, but this was one of the polkas they recorded and they just called it the New Iberia Polka, so I’m going to play that one too for you. It sounds to me, when I hear this tune, it sounds to me a lot like a hornpipe with its triplet patterns but it could have originated as a hornpipe and then later have been called a polka because people maybe didn’t recognize the style of tune it was. So it goes like this…[4:00]

So that the New Iberia Polka from the Segura Brothers. Polkas are interesting in that you hear them played a lot of different ways, a lot of different styles. I do play a lot of polkas because I play Irish music. So I do notice some Irish polka. So I’ll play an Irish polka just to give you an example of what a different style of polka would be like. So this one is called Johnny Moynihan’s Polka. So it goes like this…[5:41]

So that is an Irish polka, definitely different from those last two, played a little bit faster. And one of the guys that I studied with that really taught me so much about Cajun fiddling was Adner Ortego. And he would always talk about his grandfather wrote a polka for the family and how his mother would dance to the polka. He remembers his mother as a young child. They would go to house parties and family gatherings and he would watch his mother dance to the polka, to his grandfather’s fiddling. So I’ll play Mr. Ortego’s polka and this is called Ortego’s Polka. So it goes like this…[7:24}

Alright, Mr. Ortego! So thanks so much for joining me today. I just wanted to talk a little bit about the polka. I do understand it’s a dying dance, a dying style of tune, but I got up this morning and started playing Dennis McGee’s Polka and then thought about the New Iberia Polka and always thinking about Mr. Ortego, so I just thought it would fun to talk a little bit about it. I know the polkas, some of the polkas, and Michael Doucet played some, David Greeley I believe learned some polkas from Varise Connor. So definitely, the older players played them, and the Creoles as well, Bébé Carrière and Eraste Carrière played them.

So, pretty interesting stuff. Just wanted to talk about it so that it doesn’t die out and people maybe do play them and have fun with them. If you can’t figure out how to dance to them, they are still fun to just play on the fiddle or the accordion.

So anyway, have a great day, thanks so much for joining me, and hope to see you soon. Stay inspired, keep on fiddling, and take care. Thank you.