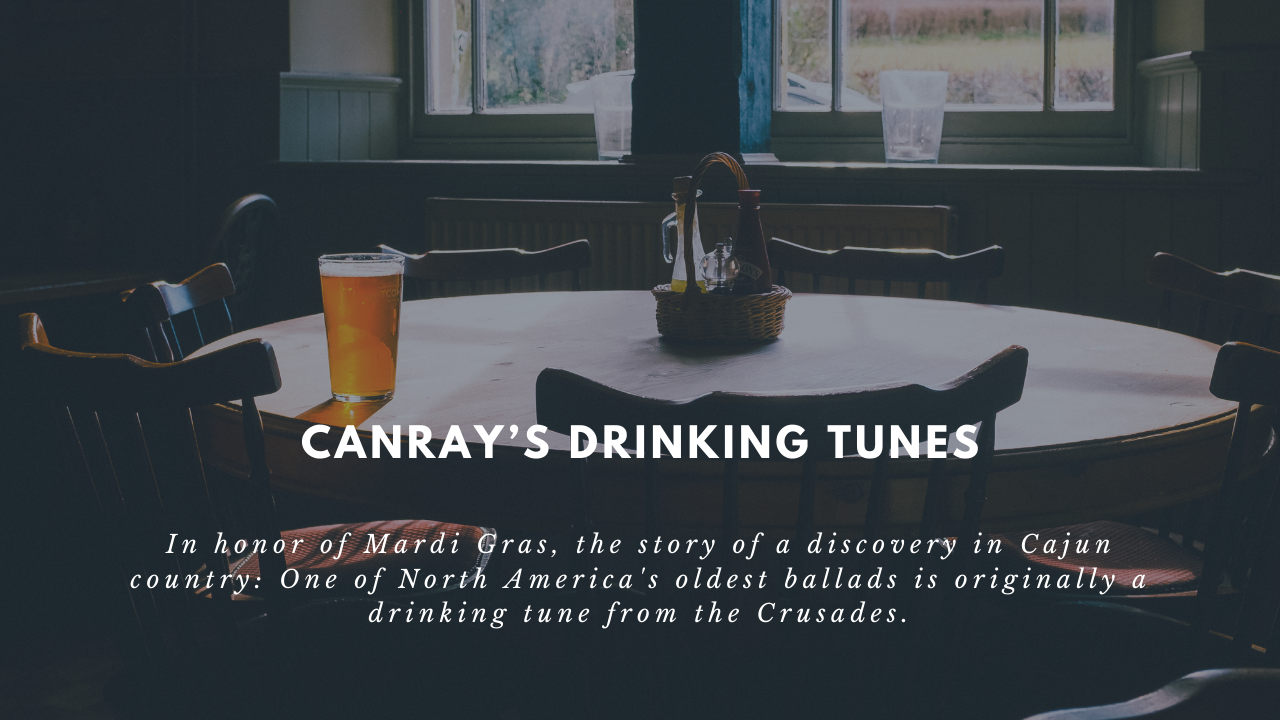 Hi, I’m Mitch Reed. Welcome to my vlog. It’s Mardi Gras season! This year I’m not going to do the Mardi Gras song. I’ve done it so many times, but I thought I would do some drinking tunes to celebrate the season. And I’ve been thinking about this. Canray Fontenot is such an interesting character, a great fiddler, and he had some drinking tunes and just the neat stories to go with it. Just to start off, Canray Fontenot was one of the greatest Creole fiddlers from Louisiana. He played with Bois Sec Ardoin and they recorded a record together. A lot of his stuff is on iTunes, so you have to check out Canray’s Hot Sauce CD. It’s a great one. So these are tunes that I haven’t played in a while but I love. I used to play them with Beausoleil and we’d play them either around Christmas time you play these or Mardi Gras because Cajuns like to drink a lot around Christmas and they also like to drink a lot around Mardi Gras. So those are two good times to do this, to play these tunes. Really, if you like to drink year-round, it doesn’t matter. Canray, turns out, was one of the fiddlers who sang one of the oldest ballads in North America that we knew of. You know, there was this folklorist named Ralph Rinzler who heard Canray sing this tune called The Round Table. And he looked at the translation of the words; it was sung in French, originally, Creole French. And he looked at the words and he thought, “Hmm, this is really interesting”. So he went back to France and he also went to Canada, French Canada, and he did some research.

Turns out Canray was singing one of the oldest ballads in North America. And this ballad goes back to Brittany, France, which is a Celtic region of France. And it was basically a song about King Arthur and can’t get any older than that. And it was a drinking song that the knights would sing before they would go off to the Crusades to fight in the crusades. So Canray, you know, when he was singing it he didn’t realize it was about King Arthur. He didn’t know about the origins. It was just so old and had been handed down to him through another old man who sang this tune when they would get together and drink at his house. And the Cajuns have this interesting tradition. I don’t know if it exists anymore. It kind of does in certain ways, but there was an old tradition. What it was is a man, an old farmer or something, would have a house and no one would live in the house. It would just be on the weekends or every now and then he would invite all these men and they would get together in this house and they would either play cards or play tunes or cook. They would probably do all of that and they would drink and they would get really, really drunk. So drunk, you know, they’d crawl around, pass out, crawl around on the floor, all that stuff. And it was just a good time. It was a lot of fun. They were called bivettes, these houses. So I actually raised my first daughter in a bivette that had been sold, you know, and it definitely had some old ghosts in it, some card playing ghosts. But anyway, going back to Canray. He did this song called The Round Table and it’s really cool. So yeah, I’ll play it now. So these are all drinking tunes. [03:38] All right. I kind of forgot it already. [03:44]

Woo! Yeah! The Round Table. So can you see King Arthur, you know, drinking to this tune? I could. Maybe a Creole King Arthur, you know, but whatever, who knows. So anyway, Canray Fontenot, amazing fiddler, amazing storyteller. I mean, he had the best stories. We used to go to his house. We used to hang out with him, even drove him around. We went on a trip to New Orleans and just all these amazing stories. Of course, didn’t record any of them, but he was such an amazing person. So anyway, the other tune that he had that I loved a lot too was... He had this other drinking song called Tranque. So it’s just to make a toast and just toasting about all your friends that you love and hope they’ll be around next year. When we hope we can all survive the wintertime and the cold and the flu season and hope we’re here again next year. To drink again. So it goes like this. Let’s see if I remember what key… [06:57] Okay, I think this is it. [07:03]

Alright! Tranque! Thank you, Canray. My God! I was too young when I was going to Canray’s house. I would have loved to have gotten drunk with him. And of course, I heard he did pull a knife out on Ralph, not Ralph Rinzler. On Alan Lomax. There’s a story that Alan Lomax thought he could get more tunes out of Canray if he got him drunk. So he bought him some whiskey and they stayed up really late at night one night and kept pushing him to do this tune. And Canray just was too tired. He’d had enough and he pulled his knife out on Alan Lomax and said, “Don’t make me have to cut you!” You know? And so anyway, who knows? It could have been fun, but when I would go to Canray’s house, his wife would always have a tray of coffee and milk and she’d bring it up, a bowl of sugar, and you’d get your coffee and your milk and drink your coffee with Canray and he would tell all these great stories and play these amazing tunes.

So, yeah. So there’s one more drinking tune by Canray I’m going to play, talk about, and this is called… It’s called La Jog Au Plombeau, which means the whiskey bottle that’s hanging from the saddle horn of his saddle. And it’s really connected to Douglas Bellard who wrote this whole trilogy about… A lot of people think it was actually about his own life, but how he was just such a bad person and how he ended up, you know, going to prison. He did all these things and it ended up leading him to go to prison. And while he was in prison, he saw this vision of himself in hell burning in the flames of hell. So out of that came three amazing tunes La Jog Au Plombeau, the Prison Bars, and The Flames of Hell. So we don’t know if it was just a character that Douglas sang about or if it was actually him.

Most people think it was about him cause Douglas was basically that type of character. So in this tune, it’s about a drunkard who shows up to visit his mother because he thinks it’s probably the last time he’s going to see her because his life is so messed up that he’s probably not going to live very long. So he shows up and he sees her on the front porch praying. She’s on her knees, praying the rosary for him because she’s worried about him. And he has the whiskey hanging off of his saddle horn. She sees him and starts crying and it’s the biggest deal. And he feels horrible about his life and how he makes his mother cry. So anyway, a beautiful, cheerful song. No, just kidding! But La Jog Au Plombeau, another drinking song from Canray Fontenot. Here we go. [12:19]

Yeah! A great, haunting song by Canray Fontenot. You know, there’s the words to it, but I hear two things in there. I hear like sadness in the A part and then the B part I hear like kind of this uplifting thing, almost kind of like joy. Maybe he’s happy to see his mother or something. So there are really two interesting parts of that tune. One is like a sad emotion and happy emotion. Woo. Heavy stuff, man. So definitely the ghosts are in the tunes. I’m not saying the ghost of Canray, I’m just saying all the people who did these tunes in the past are in their energies and those tunes. If you play those tunes and you play them right, you will open it up. You’ll feel it. It’s like woo! I don’t know. Maybe it’s cause I grew up down there and I just pick up on that stuff.

But it’s heavy stuff. And I know other great Creole fiddlers like Cedric Watson and Eddie Pullard, we all talk about this stuff as well when we get together like, “Ooh, I can’t play that tune today”. I have some Irish friends that are the same way. I have a great Irish friend that lives here up in Maine and there’s whistle tunes, airs, and stuff, that he’ll say, “Come meet me tomorrow. We’re going to play this tune.” And then he’ll call me up early in the morning, “I cannot play this tune today. It’s just, it’s, I’m going to cry all day. If I play this tune it’s going to break my heart. I can’t do it. So I’m like, “all right”. There’s a lot of power in this stuff. It’s amazing stuff. So anyway, drinking songs, Mardi Gras season. Happy Mardi Gras. Have a drink if you can, if you can handle it. I’m big into not drinking and drinking. I think it’s two completely different experiences, so I appreciate both. I’m in the land of IPAs now, so I would definitely have an IPA and a toast in honor of all these great characters up here in Maine. So yeah, enjoy, stay inspired, keep on fiddlin’. Play these drinking songs with your friends and have a drink. I toast to you. So keep on fiddlin’, stay inspired and I hope to see you soon. Thanks.