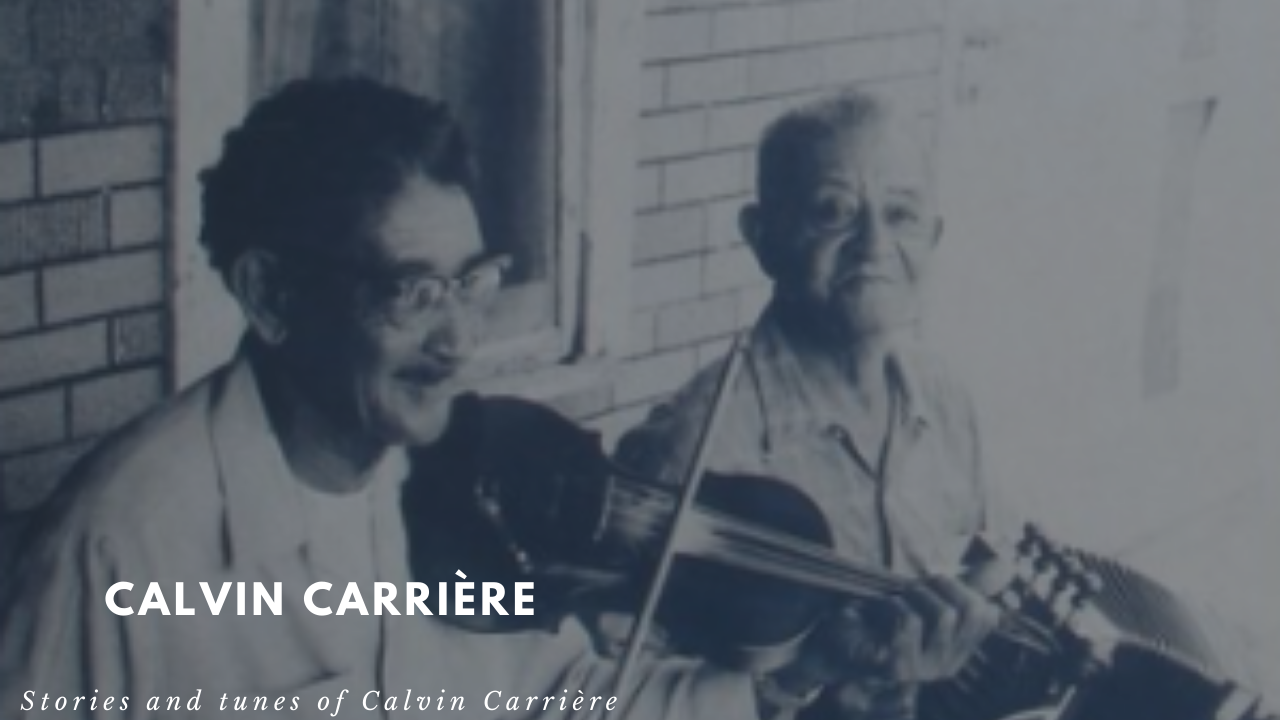 Hi, I’m Mitch Reed, welcome to my vlog! And my vlog this week is on going to visit Calvin Carriére. Just started thinking about that, how special that was for me; an opportunity to go study with a legendary Creole fiddle player from Lawtell. Calvin was the nephew of Bébé Carrière and the son of Eraste Carrière. So if you listen to the Carrière Brothers, which you can get that recording on iTunes, it’s amazing Creole fiddle.

And one of the things I wanted to talk about was the first time I went over there. First of all, they’re just amazing people, and really old school with big hearts and they made me some coffee, made a gumbo, and I started playing fiddle with Calvin. The first thing I noticed right away he was tuned down to B-flat. So I call it B-flat tuning. So this is below Cajun tuning. So what it is, it’s pretty funky and really does fit the style of Creole fiddle or blues because it makes the fiddle sound just kind of really lonesome and haunting.

First of all, you have to have a fiddle that will let you do this. Not all fiddles will let you do this. So it’s kind of one of those things if you own two or three or four fiddles, try them out and see if you want to do this kind of tuning. But the E string… our E string is down…[1:35]…it’s basically down two full steps. So that is down to a C… I’m looking at my tuner just to make sure I got this right. So that’s down to a C and the A string…[1:47]…is an F and the D string is the B-flat…[1:51]…So that’s our low B-flat. Then the G string is an E-flat…[2:00]

So great tuning for playing blues. If you have a friend that plays blues guitar or something like that, a lot of horn players play in B-flat. In Zydeco bands, this is a great way to tune your fiddle and Dennis McGee also tuned his fiddle this way. I don’t know if it was on purpose or if he just…the fiddle got flat and he just liked to sing in this key. But going to visit Calvin was amazing because he had an accordion that was actually tuned to B-flat. It was an old Cajun tin button melodeon that was in B-flat. So you could get that out. And I’d play some fiddle and then he would play some fiddle and he taught me a bunch of cool tunes.

So just to give you an idea of how that works, B-flat, I’ll play a couple of tunes that he showed me. So this one is a classic tune that he played and Bébé Carrière played and then just called this Madam Fayette. So it goes like this…[2:59]

So I like this tuning. It’s fun to play this tuning every now and then, especially when another fiddle wants to do this…

It’s just funky, and it’s even really good for if you’re trying to practice late at night and you don’t want to be too loud because it really quiets the fiddle. But it gives it some interesting tones and like I said you have to have a fiddle that will accept this tuning. Some fiddles may lose a lot of tone. So those are the ones you want to avoid. But sometimes, when you tune down, it gets richer and that’s what this fiddle is a Romanian fiddle. Not an expensive fiddle, just a factory fiddle, but it loves…it gets richer as it goes down to this tuning. Calvin played an old fiddle but it was, you know, nothing super fancy. It was probably an old, I would say, a Farmer’s Almanac fiddle from the 20s or something. But he played it tuned down, most of the fiddle’s life it was tuned down. So it was totally seasoned to that tuning.

So, I’ll play another one that I used to play with Calvin. First of all, Calvin was this amazing guy, the sweetest person you’ll ever meet, humble and giving, loved everyone and his wife as well and the whole family was just amazing. And he passed on Creole music the best he could.

The fiddle has kind of died out in, you know, what maybe we could call Creole music or Zydeco; it’s hard to find fiddles fiddling in that music anymore. But people like Cedric Watson, Eddie Poulard are still doing it, and Jeffery Broussard. So hopefully it’ll live on, and that’s kind of the style that I prefer as well as Creole.

So we’ll do another. This is one he taught me, it’s called La Robe à Parasol and it just means A Hoop Dress and he says in the words, I’m not going to sing it, but the words, you know, “lift your dress a little bit so I can see your legs, your pretty legs.” So it goes like this…[5:58]

All right. So thanks so much for joining me. I just wanted to share a little bit of memories with Calvin Carrière. Check out the Lawtell Playboys, Calvin does some fiddling with Jeffery Broussard’s father Delton Broussard and they called their band The Lawtell Playboys. It’s also on iTunes. And Goldman Thibodeaux played rubboard with him and Goldman Thibodeaux is still around and he’s a great guy to visit if you ever down in Louisiana for stories and just the past and how things used to be.

So thanks so much for joining me, stay inspired and hope to see you out there in the Cajun-Creole fiddle world soon. Thank you.