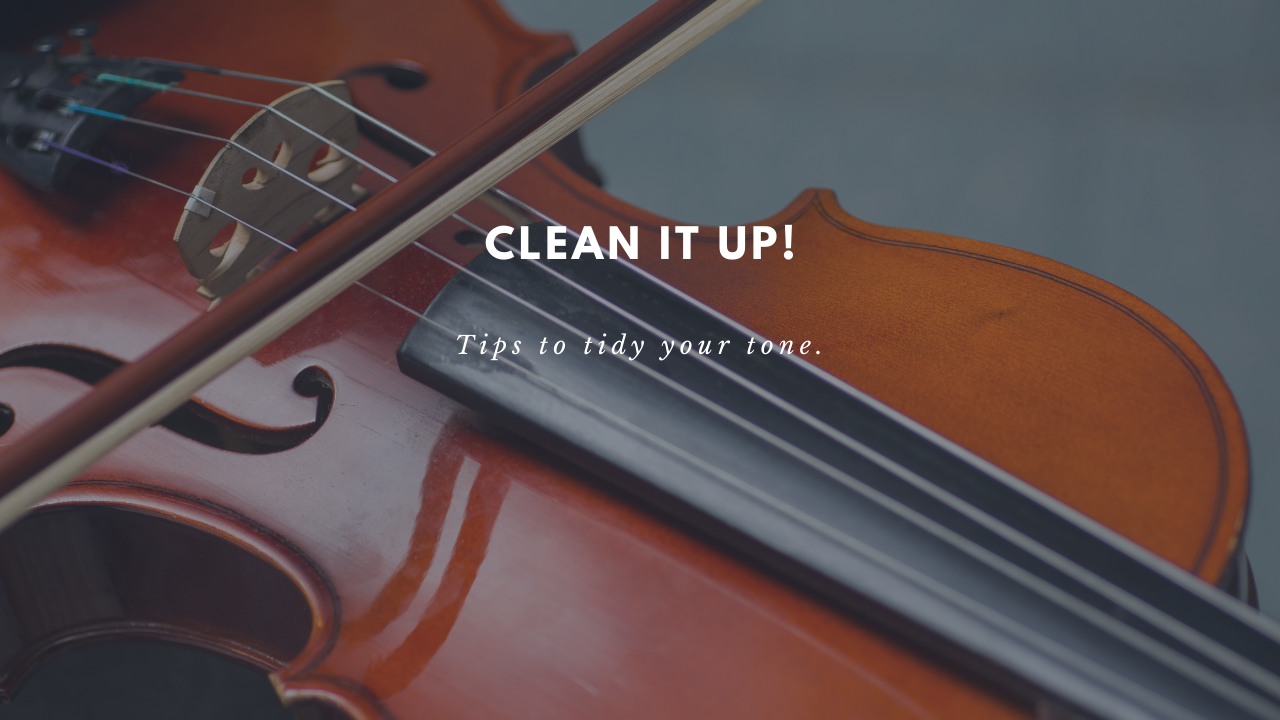 Hi, I’m Mitch Reed…Welcome to The Vlog! Today I’m going to talk about really just trying to get a clean sound.

I’m actually a big fan of this guy on YouTube. He goes by the name FiddleHed and I think he’s a great teacher, a great beginner teacher, and this vlog is geared more towards beginners…if you’ve been playing for a year, maybe getting into your second year.

I remember too, like one of the frustrating things is you’ll learn a tune and you will go to play it and it just sounds sloppy. It sounds like the fingers and the bow aren’t together. I think that can happen if you try to learn something too quickly or if you try to play something too fast.

Always remember, to me…and I call this the secret…is that when you learn a tune, and this is really where the discipline in music comes in, play it slow for a long time if you can. I’ve heard some people say “Well, I can’t play it slow because it doesn’t sound right”, you know? And that’s too bad.

If you could even use a metronome and you can get the tempo to a certain level where it’s making you play it slower than you would perform it or than what you’re hearing it on a record. That’s a really good thing because what it’s going to do, it’s going to make you have the discipline to control what you’re doing. It’s also going to give you time to think about stuff and I just think it’s really important. So I don’t think it’s a huge issue to play with a metronome but give it a try. There’s apps on the smartphone you can get or whatever. But trying to get a song clean that you’re frustrated with that’s basically what I want to talk about.

If there’s a tune out there that you’ve learned, you’ve got all the notes, you’re playing the notes right but when you play it you don’t like the way it sounds. It sounds dirty and not clean or jumbled.

So one of the first things here, one of the things I see teaching out of my house is sometimes people also tend, with Cajun fiddle, to add double strings a little too quickly. If you’ve been playing for only a couple of years I totally recommend learn the single notes. Learn the true notes of the melody. Then when you really feel like your left hand and your right hand are just automatic, rock your bow and catch that open drone string. But don’t try to add the double strings too quickly because what it does is it…you can kind of muddle things up.

So I think the best thing to do is just show you an example with a very easy tune. But you can do this with any tune. You can do with it a complicated tune, you can do it with an easy tune. And what it is…I’m going to use Mon Vieux Wagon. This is actually one of the first tunes that I always teach people who are interested in Cajun fiddle because I think the melody’s real catchy, it’s pretty easy to get and it introduces you to real traditional Cajun fiddling pretty quickly.

So let me play Mon Vieux Wagon and then I’m going to show you a little exercise. In fact, you could look at it as an exercise with any tune and it will very quickly clean your sound up, okay? So Mon Vieux Wagon is an old Balfa Brothers tune and it goes like this…[3:57]

Alright, so I played that with the double strings, not too fast. Sometimes it’s played a lot faster. But if you’re playing it and it sounds jumbled, everything is kind of mixed up, you know? Let’s see if I can do that…[4:37]. You know, what I was doing there, just basically my left hand and my bowing weren’t…the pronunciation of each note wasn’t there. So that tends to happen sometimes if you’re moving your finger or if you’re moving your finger to the next note and you still bowing in that same direction…I mean it’s called a slur but you know you really want to understand the style of every tune. In this particular one, you’re really bowing every note. That’s what gives it the rhythm.

So let’s just look at this as an exercise and the first thing I’ll say is every single tune is different. It’s not like you can learn a Cajun Two-step and a Cajun Waltz and then BAM! you understand Cajun music or you understand every Two-step or every waltz. It doesn’t work that way. You have to approach every single tune that you learned in Cajun and Creole music with a whole new understanding of that particular tune.

Even if there’s a tune that sounds like another tune, there’s little things in there that are different. And you want to think that way because it will make you play tunes differently and you won’t sound the same all the time. So that’s another good reason.

So let me give you an example of the exercise to clean the tune up, okay? So I’m just going to play the melody first, normal, just to show you…[6:19]

Okay now here’s the exercise and I totally got this from FiddleHed because I think it’s great and I totally agree with him: I think it’s a great way to clean things up. What I’m going to do is I’m going to play one note and I’m going to stop my bow and then I’m going to move my finger to the next note and then start my bow again. Seems kind of ridiculous but what it’s doing and you might even be saying “Hey! I did this already. I did this when I learned the tune.” But do it again because this is what it’s going to do: you’ve learned the tune and you’re thinking about it now in a different way than when you learned it in the very beginning. And what it’s going to do, it’s going to make your bow pronounce every note with your finger.

Play it slow and again always remember there’s a lot of discipline in music and when you hear a great musician they understand the discipline and they put discipline in their music. So that’s really important. There’s a big difference between practicing and performing. So this is practicing.

So I’m going to give you an example: take that same phrase but now I’m going to put that space between every note…[7:58]…Stop, first finger, stop my bow… Stop my bow…Put my finger…Okay?

So that’s basically it is you’re just stopping your bow between every note move that finger then move your bow, okay? And it’s boring and you may think “meh, that’s not going to help” but give it a try because you’ll be very surprised. I actually have still a lot of tunes that I work on that I feel they’re just not clean enough for me…and I’ve used this technique. It really works and you can use it as a meditation or something, you know. Zone out if you want. It’s that easy.  But it will get you the sound cleaner, alright?

So I’m going to do the next phrase now…Now I’ll now apply that exercise. I’m going to apply the cleaner to it. You can think of it as a polish…[9:25]…And don’t worry about when you come to a stop.  You might get that little grunt you know, a little…[9:50] Don’t worry about that. That’s not what we’re focused on right now. What we’re focused on is getting the left hand, the fingers, the notes coordinated with the bow. All that’s going to be cleaned up when you connect the notes again, okay? But they’re gonna be more pronounced now.

So the third phrase…And now the polish…[10:21] And the fourth phase…[10:42] Now the discipline the polish…[10:53] And don’t cheat and get bored and start connecting the notes. Always put that space. Stop your bow between every note and then start it. You could stop as long as you want. You know what it’s doing is it’s separating everything. I like to think of it as a puzzle that you put together but you don’t like the way it looks. You’re taking it apart and you’re putting it back together but this time you’re putting it together slowly and now you know the puzzle inside and out so when you put it together now again you’re going to get it clean. And just remember, again, try not to play it too fast.

So you can actually go…[12:13] It’s gonna probably sound worse because you’re stopping the two strings so you’re going to get this kind of crazy sound. You know if you’re frustrated with sounding sloppy a lot of people tend to think it’s their tone. So they think just all here in the bow. But again getting your fingers and your bowing coordinated. So if you can get that set up and you can get that working then things are going to get cleaner and then your tone is going to sound cleaner.

So I would say fiddling is like juggling. You have the left hand, the fingers, the notes. You have the bow, and then the third ball is when you put them together and you get them to work together. So there’s always like three things you’re kind of thinking or kind of watching out for.

The other thing I was gonna say be careful what tunes you learn. I sometimes teach people who’ve only played a year and they want to learn the Perrodin Two-Step. It’s a great tune but you’re not really ready for it, you know? So definitely start off learning tunes that you like and that you’ve heard, but pick some easy tunes. If you have a teacher ask them, “Is this good for me to learn?” because you don’t want to learn anything too hard, too fast, yet.

So yeah! So good luck and I hope this helps. I really believe in it and I think if you’re frustrated…you’re always going to be frustrated! Just being a fiddler is frustrating. The instrument is frustrating and there are moments of…of course you know most of the time it’s fun and you enjoy it…but definitely it’s really common to have your moments where you just want to put it in the case forever or throw it against the wall or whatever. That’s totally normal. Understand we all go through that. But try this exercise. I think it will really help you a lot.

So thanks so much for joining me in this Vlog and stay inspired and keep fiddling, don’t give up, and hope to see you soon somewhere at a Jam or something.

So have a great day and see you soon, talk to you soon.