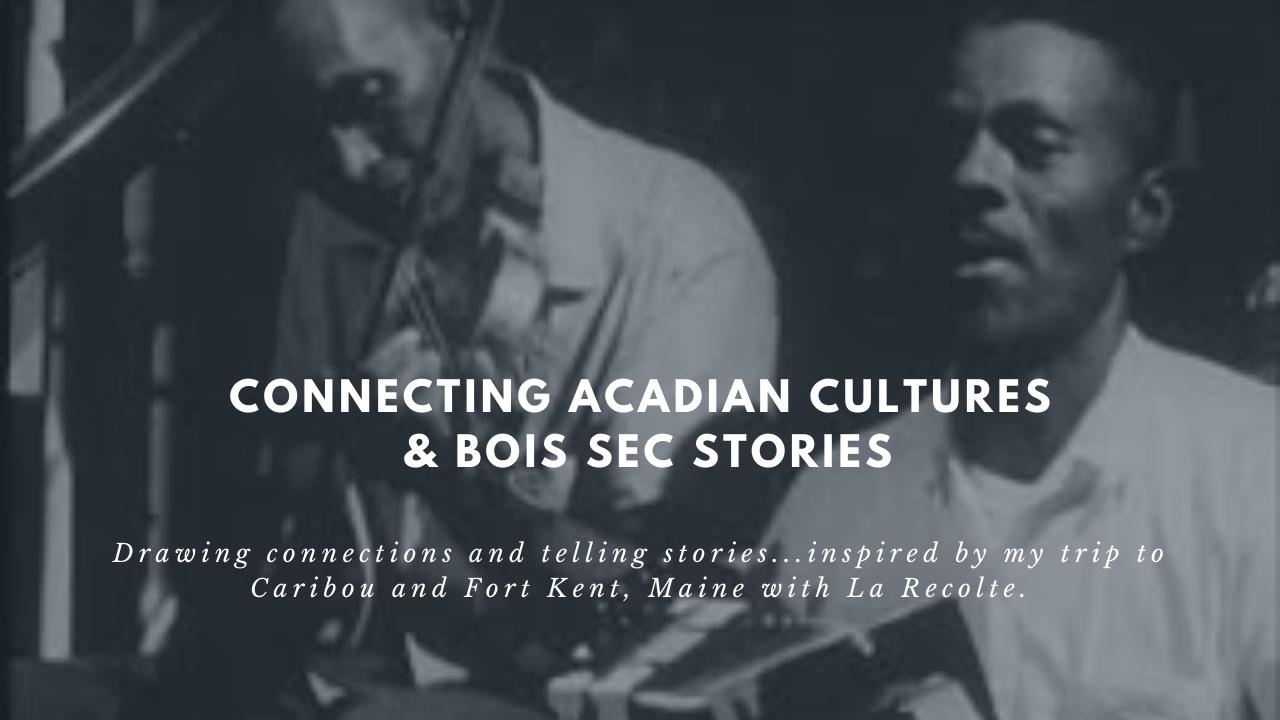 Hi, I'm Mitch Reed. Welcome to my vlog and my vlog this week is on the connection that I’m making up here living in Maine with the Acadians in the Northern part of the state. So this past weekend I just went up to Caribou, Maine and Fort Kent, which is right on the New Brunswick border, and met a bunch of Acadians, hung out with some musicians, and had a great time. I played music with a band from Cankton called La Recolte and they had friends up there, so, you know, hung out with those guys. And met a bunch of Acadians in Northern Maine and I’m really, really loving living down here and I got my Big Foot mug. I haven’t met any Big Foot Mainers yet, but I’m on the lookout. I just wanted to play a tune. There’s a tune that I always thought was really interesting that Mike Doucet found. These two turtle hunters from Cameron played this tune and it was an Acadian jig. They called it a jig. It’s not in six/eight, but it definitely has… Now that I’m living up here, I can hear those connections with that tune that they played, the Acadian Jig, so I was going to play that and keep doing research up here. Maybe I can find out, some tunes that are very close to it so it goes like this. [01:28]

Alright, “Jig Acadian”, a tune that Michael Doucet found, played by the Allemond brothers who were turtle hunters from Cameron. So kind of an interesting little tune there. The other tunes and things I’ve been thinking about up here is just the gris-gris stuff and the Creole culture. Being away from that now, it’s very different up here. A lot of interesting stuff going on up here, but really missing that culture, that Creole culture. And I was thinking of the little bit that I got to hang out with Bois Sec. He told me a really interesting story. Both Bois Sec and Canray were great storytellers and they always had these kinds of spooky stories about hanging out, you know, going out in the woods at night as children, and running into these crazy characters.

And this one story that I love Bois Sec told where he wasn’t supposed to leave his house, but he and some boys left at night and they were going through a field. They were going to go meet another group of friends and they were cutting through the woods and they saw a fire and these men were hanging around the fire dancing and getting drunk. One of them had an accordion and he was playing this tune. And it was called “La Zydeco Gris-Gris”. And just the whole story, the way he told it, it was really kinda spooky, these young boys at night coming across these crazy guys jumping around, jumping over a fire. And Bois Sec also mentioned that he was, frightened by it. He was scared. He wasn’t sure what was going to happen, but they were able to sneak by. But what’s really funny about it is he got a tune out of it. He learned a tune.

And to just quickly mention how Bois Sec got into music is really interesting because he got his name because he would bring water to the men when he was about 10 years old. He’d bring water to the men who were working in the fields and when he wasn’t bringing water, to get out of the sun he had found an old hollowed out log and he would get in there, hide from the sun, also take a nap. So every now and then they would be looking for him. “Bois Sec, where you at?” But they gave him the name Bois Sec because that means “dry wood.” And he was always hiding in this dried out log. So that was kind of interesting. But his brother played accordion and his brother never allowed him to touch the accordion. But when his brother would go to work, Bois Sec would pick it up and mess around with it. And he would quickly put it up when he saw his brother returning back from work. One day his brother came around the house and came in through the back door. Bois Sec was playing and his brother snuck up on him.

And he said, “Boy, I told you never to touch that accordion.” He said, “You know what I’m going to do to you? I’m going to give you that accordion because you play it better than me.” And that’s how Bois Sec got his first accordion. So I love that story, too. And he came from just an amazing family of people. So anyway I’m going to play “Zydeco Gris-Gris” in honor of Bois Sec and all his great stories. And Mike Doucet, too, who made it into an amazing song with Beausoleil. It goes like this. [06:31]

Alright, Bois Sec Ardoin, a little tune called “Zydeco Gris-Gris”. And when I play that, I can just picture those drunk guys dancing around a fire in the middle of the night around Duralde, Louisiana. And actually, my family’s not too far from there.

So thanks so much for joining me today. Stay inspired. Keep on fiddling, keep listening to new stuff, new tunes, and watching videos. Go on YouTube. That’s how I stay inspired and jam with as many people as you can that you enjoy playing music with. So hope to see you again. Thanks so much for watching my video. And if you’re interested in these kinds of tunes, I do like the weird tunes and the off the wall tunes. Check out my website, Mitchreedmusiclessons.com and I actually break down a bunch of these tunes so you can become a member and you can stream me breaking down different tunes, different levels. I have beginner, intermediate, and advanced and all that kind of jazz and some more stories about the people, and the culture, and the music, and all that.

So thanks so much. Keep fiddling. Pick it up every day and hope to see you soon. Thanks so much for joining me today.