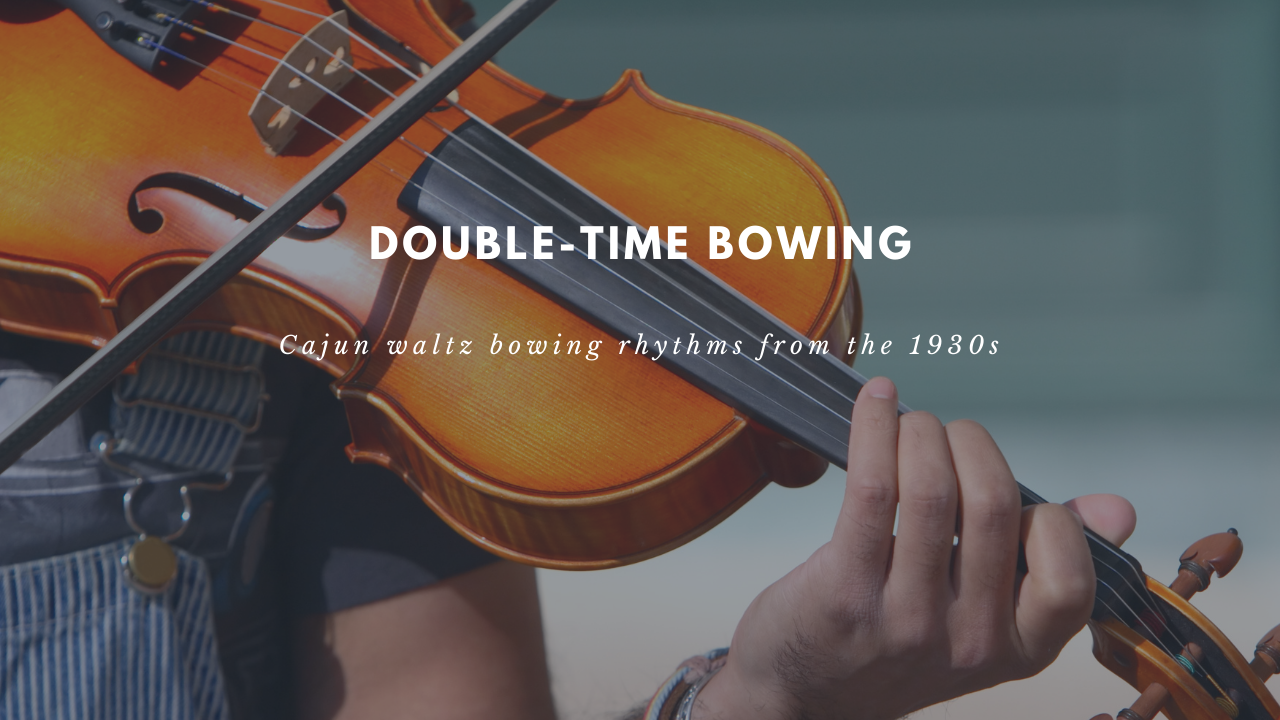 So some of the old-time tunes that were recorded like in the ’30s and the ’20s, some of the fiddlers used some of this quick waltz rhythm, double bowing rhythm, and I was just going to kind of you know talk about that, kind of show some examples of that. You don’t find it too much anymore but it was really an interesting time for Cajun fiddling. So I’ll just give a couple of examples of that, so here we go [00:54]

So you hear this also in the old-time Cajun waltzes of the accordion play. So it’s kind of neat because you can do a lot of different things when you get your bowing doing that [02:07]. You can do that even only when you do the chords [02:32]

So kind of a fun way to play; a lot of new neat tunes came out of this using this rhythm, seemed like everything eventually, later on, slowed down a little bit more. Maybe it’s just a different style of dancing the waltz. So let’s see, I’ll play another one, I’ll do this one called The Kaplan Waltz [03:07]

So yeah, a lot of interesting things you can do with this rhythm. It changes the feel of the waltzes, the sound of the waltzes, and I like how you can rock your bow a little bit on this [04:03], instead of just going [04:07] which is another style of playing also.

So yeah, a lot of interesting players played this way. A guy by the name of Wayne Perry did a lot of interesting stuff. He had some unusual waltzes with this same rhythm you know [04:27]. This is another one [05:08]. So, kind of fun stuff, so yeah. If I were to walk you through it I would just practice that rhythm first, that [05:57], and really program your bowing arm just to do that. Now take a waltz, maybe a real simple waltz that you know, and don’t change anything with your left hand, just change the rhythm of the bowing. So it could be a…let’s take a simple waltz like J’ai Passé [06:17]. Then now let’s add that rhythm [06:43]. So the few things that I am changing is I’m giving some walk down and some walk-ups so [07:12] which are just arpeggios based on [07: 18] like this third finger on the A string which is…we’re tuned down so it’s a C [07:24].

So I’m kind of throwing those in just to fill in some spaces where there were maybe long notes and it would create an interesting rhythm. But for the most part, it’s here; it’s where you’re getting it. So that’s what I would try first. It’s just taking some simple waltzes and adding that rhythm to it. Listen to tunes from the 1930s which are usually ’78 recordings. So people like Wayne Perry was actually on Lomax recordings, even people like Leo Soileau. So you start to hear the influence of maybe Texas music, Texas swing, East Texas coming into Louisiana. But it was…it’s such a nice style of Cajun fiddling that I would say kind of died out. We view it now as old-timey but when you look at the influence it was actually another influence of music coming into Cajun music so pre…you know, before like where Dennis McGee was playing reels and mazurkas and stuff and then this style of bowing came in and kind of changed things up especially the waltz. Anyway, just kind of fun stuff to check out so I’ll leave you with another waltz. I don’t know what I’m going to play but I’m going to do that bowing so no matter what I do you know the style would come out the same. Let’s see what we got here. [08:57]

Alright! Well, thanks for joining me today. Just wanted to talk about that little style, that bowing technique from the 1930s that kind of has gone away now but it is fun to play in that way so it’s what I would consider a fast waltz. And just think about the rhythm I talked about and have fun with it and good luck, thanks for joining me. I always try to post just interesting little techniques and bits on style, Cajun fiddling, and that kind of thing. So let me know what you think and if you have any requests or any other ideas let me know. Alright, keep on fiddling, stay inspired, thanks for joining me.