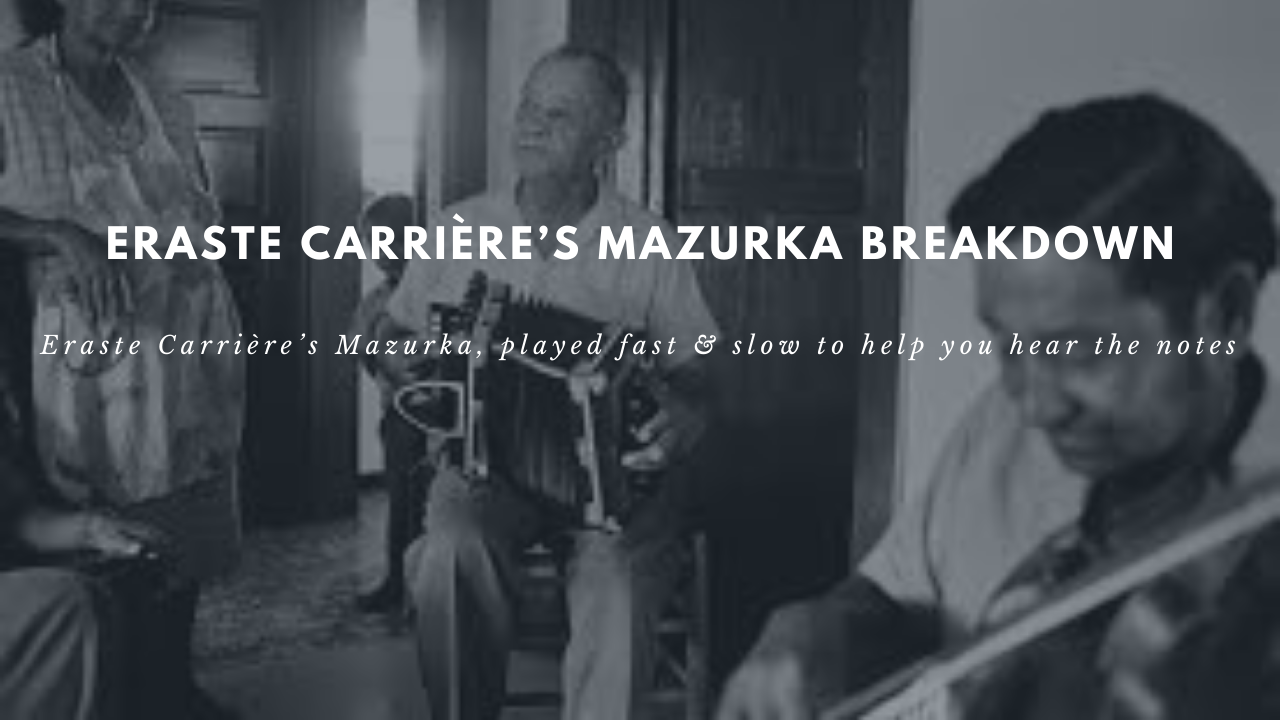 Hi, I’m Mitch Reed and my vlog this week is on Bébé’s brother, his name was Eraste Carriére. And he had a mazurka that he used to play on the accordion, and just thought it was a neat tune. So I thought it would be fun to play it and then break it down, slowly. So it goes like this [00:21]

And I’m actually sliding my second finger for that unison… [01:23]

And that’s the tune. Pretty simple. The thing about Creole tunes is, the melody is simple, the rhythm is tricky, but when you put it all together it becomes very hypnotic. And I always visualize it as a circle. So it is a circle and you get entranced once you get the tune. The tune is fairly simple so you can learn the left hand pretty quick.

The bowing, the rhythm, you have to watch out for because that can be a little bit tricky. But when you get it, it’s just awesome to play. It’s a lot of fun. And, you know, the tradition of Creole music was all about just rhythm and giving people a rhythm and a beat to dance to. So it wasn’t always about these fancy melodies.

So if you want, you can add a B part or some kind of alternative part. But yeah, this music is very powerful, very hypnotic and it’s all about the rhythm. And check out the record, it’s on iTunes actually, it’s called The Carriére Brothers. And it’s Bébé Carriére on the fiddle, and his brother Eraste Carriére on accordion and they play together and it’s amazing music, and the rhythm and just the whole versions of their tunes. We call it Creole music, but really, Creoles and Cajuns played a lot of the same tunes. Just different styles is all it really was.

And mazurkas, you found mazurkas in the old days, like almost pre-accordion days. So you could say maybe 1920s or even further back, and Dennis McGee played a lot of mazurkas. But this one is really unusual, the timing of it. And so I usually think of mazurkas as waltzes, you know, they tend to be a little bit faster than modern Cajun waltzes.

So anyway, I hope you enjoyed this week’s vlog. And I always like finding old rare tunes like that, things you won’t hear anymore played, that are only played by hardcore traditional players. There’s one Creole master left, his name is Goldman Thibodeaux. He used to actually jam with these guys, the Carriére Brothers, and he’s still around. So if you run into him, like at Festivals Acadiens et Creole or any Cajun festivals, make sure you get some time with him while he’s still around.

Okay. Thank you so much for joining me today and stay inspired, keep on fiddling, I hope to see you soon. Thanks.