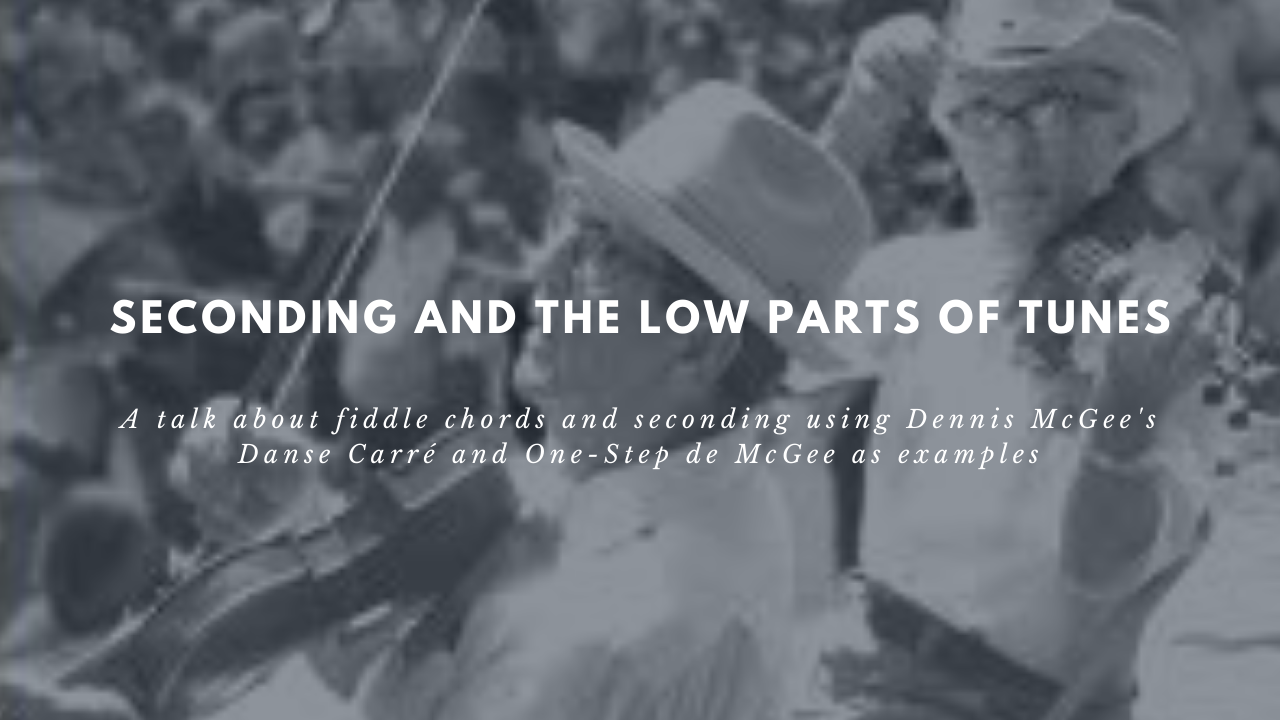 Seconding and the Low Parts of Tunes

Hi, I’m Mitch Reed and welcome to my vlog. Today my vlog is going to be about seconding and the lower parts of tunes. So if you listen to Dennis McGee and some of the oldest recordings of Cajun fiddling, they were usually two fiddlers and one fiddle player played either the octave below, or a countermelody, or sometimes just chords, and a rhythm on top of those chords. So I thought that would be fun to talk about today. And I was just going to pick two Dennis McGee tunes that are great tunes to know that he played. I’ll play them slow and play the lead part or the main melody part and then play the low part. And there was a second fiddler that played with Dennis McGee who recorded with him. You can hear his playing on the early recordings of Dennis McGee, the green CD. His name was Ernest Fruge and he was a tremendous fiddle player and really played just as well as Dennis, but he always played on the low strings.

So he would play mainly on the G and D while Dennis stayed up on the high strings. And then also Sady Courville played with Dennis and Sady did a lot of really interesting stuff with chords, rocking the bow, and getting these types of bow rhythms with just the basic chords. So I just want to show a little bit about that. Definitely go listen to the early recordings of Dennis McGee. It’ll make more sense. And really if you’re into Dennis McGee’s fiddle playing, that’s the record you should start with, in my opinion. And then he’s kind of, you know, he’s really the grandfather of Cajun fiddle. So if you’re interested in Cajun fiddle you definitely need to listen to Dennis McGee and know a little bit about him. So I’ll just start with a tune.

And this one is called La Danse Carrée and it means square dance. And it comes from the days where they used to do house dances and they would do Contra dancing and things like that. I’ll play the melody. I’ll play it slow and this will give you a chance so you can also learn both parts. And if you go to your options in YouTube, you can slow the speed down, but keep the pitch. So try that. So I’m going to play the melody first and then I’m going to play the low part. So it’s got three parts. It’s got an A part, a B part, and a C part. I do break these down on my website. If you go to my website, Mitchreedmusiclessons.com and you become a member, you can have access to all these McGee tunes and stuff like that where I break them down a little bit more. But I’ll keep it pretty simple. So this is La Danse Carrée. So the first round I’m going to do the high part and then I’m going to play the low part and then we’ll also talk about some other things you can do with it as far as seconding goes. So here we go. So La Danse Carrée. [03:07]

Alright. So those are both parts of La Danse Carrée, low and high. So let’s look at the chords. So a lot of times people ask me questions after I’ve done some of these videos about seconding. One of the first things you want to do with Cajun seconding is to learn the chords. So learn what are the chords. If a guitar player was sitting in with the tune, you know, what would be those chords that they would play? Sometimes when it’s just two fiddles that doesn’t always matter because you can play unison, you can play harmonies, counter melodies. To me to give it that Cajun sound, you do want to learn the chords as a second fiddler. Cause that’s the other option. You can just play chords with a rocking bowing or a bow rhythm on top of that. So we’re tuned down, Cajun tuning, so it’s in C [05:32] And that first part… [05:32]

Okay, sorry, I’m learning it myself. So again. And that’s that part. So that part’s a little weird. So now that we know the chords that now we can go and put something on top of it, some kind of bowing thing. So, you know, going back and thinking of that style, thinking of Sady Courvelle and what he might’ve done. Let’s look at that. So dah-dah-dah [08:04]

So this is what I just call rocking bowing and it’s pretty easy. You’re making those chords and you’re just rocking and trying to get as much of that chord as you can from as many strings as you can. I wouldn’t use the high E but you know, definitely the G, D and A are all good to use. [08:24].

If you want, you don’t have to do the rocking bowing if you want to just do a shuffle, a simple fiddle shuffle… [09:29]

All right. Something like that. So anyway, that gives you a little understanding about how the style works. It definitely helps when you can record yourself sometimes that helps really well. Record yourself and play along with the recording of yourself. So, second, you playing the lead helps or if you have a friend that also knows these tunes. Seconding definitely takes some time. It can be sometimes a little bit more difficult than learning the lead or the melody because there’s so many possibilities of things that you can do. It’s a lot of fun when you get comfortable with it and understand it, how it works, it can be a lot of fun. So anyway, so that’s Danse Carrée. Let’s take another Dennis tune and this is another good one. So this is another reel. He called this One Step de McGee. He called it a one-step much it’s very much like a reel as well. And this one’s pretty well known too. So this one, I’ll play the melody. Same thing. I’ll play the melody, then I’ll play what Ernest would have played, and then we’ll look at what Sady Courvelle would’ve played. So it goes like this. [11:20]

And then the B part that ah, that dah-dah, it starts in G. So you could do just the regular shuffle bowing and that’ll work. I like to do the rocking like Sady Courvelle did. So you can go like [14:47] I’ll start with the A bar. [14:48]

Alright, so what can really be cool too is if you get three fiddlers together and you can do those three parts as well. So you can do the lead fiddle, the octave countermelody fiddle thing, and then the bow rocking chords. And there you go. You have like a Cajun Arkestra, Cajun fiddle orchestra, really cool stuff. And so those guys like Dennis McGee, Ernest Fruge. I mean, they were pretty spontaneous too as well. I mean they stuck to a melody, but Ernest especially was very spontaneous in what he did. It’s hard to hear in those recordings cause they’re 78 recordings. But sometimes it’s hard to tell who’s doing what if it’s Dennis or Ernest. Cause Dennis would go to the low strings. He would oftentimes play a melody on the E’s [16:23] and then you would walk from the bass strings, you know, to the bottom all the way back up. [16:32] Oh, I’m playing the wrong key. [16:43].

So there he’s using all four strings. Which, talking to people like Mike Doucet and Barry Ancelet, when they hung out with Dennis, he said that a lot of times he would get hired to play a house dance by himself. They couldn’t find another accordion player or another fiddler. And so he had to be everything. He had to be the low bass part of the fiddle and the high part of the fiddle, which explains a lot of the reels, the way he played there. [17:35] He would do this kind of bowing. [17:38]

Pretty cool. I mean, he’s covering it all. Leave it up to a Cajun to figure that out. So anyway, I hope you enjoyed this video. Just trying to answer a few questions and show some examples. From some questions that y’all have asked me about second fiddling. One of these days I’d love to get another fiddler to sit in on a vlog with me and then we could show the two parts. It’d a lot of fun, but definitely go to the recordings of Dennis McGee and listen to them… The best one to me is the early recordings of Dennis McGee cause you’re really hearing Dennis and Ernest and Sady at their prime when they were really playing extremely well. And the one after that that I like is the Encore CD. It’s with Sady and Dennis.

Everything Dennis did to me was great. And he’s my ultimate hero and he’s really the reason why I pick up the fiddle every day. I think about Dennis McGee and just what a character he was and just such an interesting guy and I just loved everything about him in the fiddle or what he made the fiddle out to be for me. And his fiddle was great. It was this all covered in rosin and stuff. So many, many more stories that we could tell about Dennis and we’ll get there. We’ll get there one of these days. stay inspired. Keep on fiddling. I hope you enjoyed this and check out my website, mitchreedmusiclessons.com. You can become a member. I break down a ton of Dennis McGee tunes and try to cover all the old masters, you know, Canray Fontenot, Dennis, Dewey Balfa, some Varise Conner, people like that, Wayne Perry, all the old-time guys.

So yeah, keep on fiddlin’. Thanks for joining me today and I hope this helped out and keeps you inspired, keeps you going. I know watching YouTube videos is what really gives me a lot of inspiration, so thanks so much. Y’all take care.