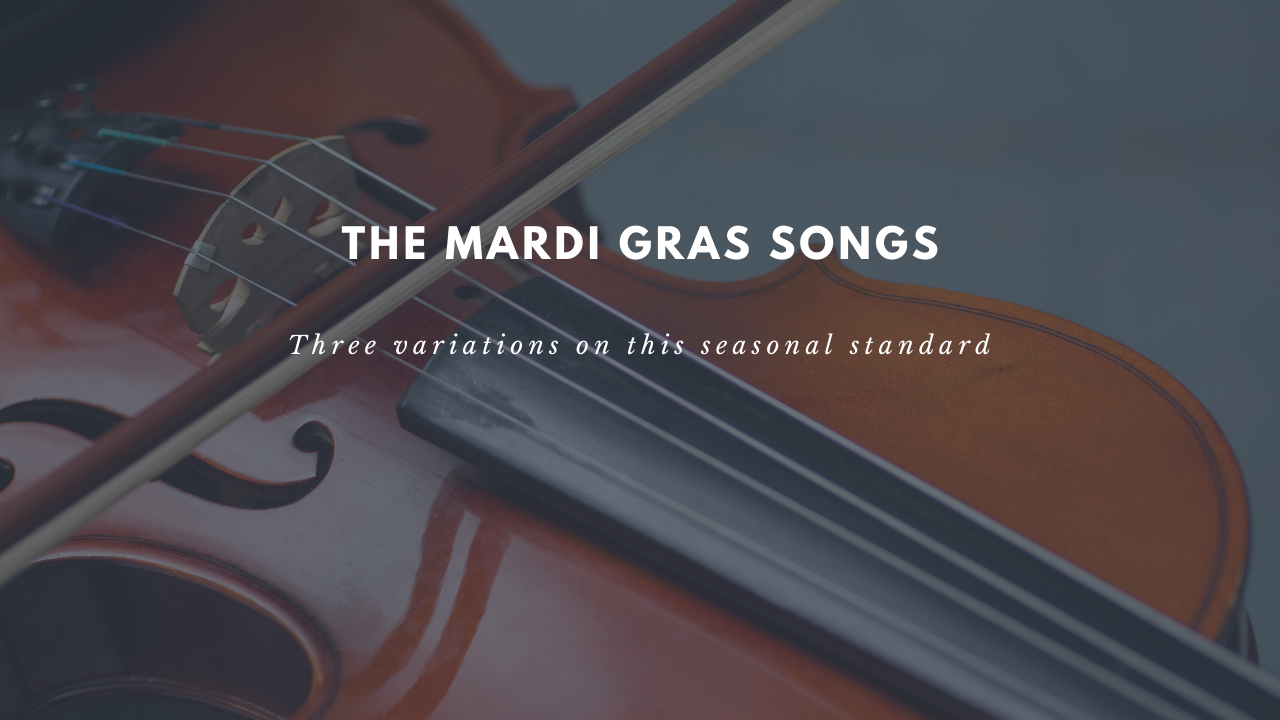 Hi! Welcome to my vlog. Today I thought it would be kind of fun to talk about the three different Mardi Gras songs that you’ll hear played on the fiddle and the accordion as well. If you come down here to South-West Louisiana, especially for Mardi Gras Day and the weeks leading up to Mardi Gras, and you go out dancing, and you go to parties and stuff, you’ll hear this tune played a lot. There’s three different versions that you might end up hearing so I thought it could be fun to kinda talk about those things.

The first version I always talk about is the accordion version which is usually played on a C accordion in the key of A minor which is kind of weird. We don’t have a whole lot of A minor tunes in Cajun music and especially on a tuned down fiddle, a Cajun tuned fiddle. So I thought maybe we could do that one first.

The second one which is, I consider the best one for the fiddle, it really makes the fiddle sound well, is what most people refer to as The Balfa Brothers Mardi Gras Song which is played on a tuned down fiddle in the key of G, and it’s also a modal pattern, so it’s not just minor or major, it’s modal, it’s a little bit of both and that’s the Balfa Brothers Mardi Gras.

And then the third one is what I refer to as the Creole Mardi Gras which Boozoo Chavis recorded, some other people redid. Cedric Watson did it, and it’s another really interesting version of the Mardi Gras.

There’s a bunch of others out there, and we can’t cover them all, but I love Wade Frugé’s version I find is very unique, and even Adam and Cyprien Landreneau their video on Rainbow Quest on YouTube. They play a version of the Mardi Gras that’s really interesting, BeauSoleil as well.

Alright. That is the Accordion Mardi Gras. I like that one a lot. It’s one you definitely want to learn if you’re headed out there on a run, a Mardi Gras run, chasing chickens and eating boudin, and boiled eggs and drinking beer, especially in Mamou. You want to have that one prepared cuz that one they would play all day! So let’s do the next one which is the Balfa Brothers Mardi Gras. So this one’s in G and it has a modal pattern to it, kind of like Parlez Nous a Boire or the Balfa Waltz. It’s kind of, it has the same patterns okay. So it goes like this…[4:43]

Alright! The Balfa Mardi Gras. So that is very popular, especially with the fiddle. I think the fiddle just has such a beautiful sound when you play in that modal key, that G modal pattern.

So the third one is the Creole Mardi Gras. Boozoo Chavis recorded this and Cedric Watson and… I actually learned this one from Calvin Carriere, hanging out with him… And in the old days, every community had kind of its own version of the Mardi Gras song. Now because of recordings and stuff we’ve kind of standardized everything to maybe these three but there’s a lot of different versions still hopefully floating around out there surviving. So this is Creole Mardi Gras… Tour les Mardi Gras… Okay? [6:54]

Wow! Mardi Gras, I can’t wait, I can’t wait. So anyway trying to stay clean and healthy right now so when that week comes I can go crazy and eat all the pork and fat and boudin and drink all the Bud Lights I can get my hands on. So you all have an awesome week. Thank you so much for joining me. Getting close to Mardi season so get excited! Okay… And I’m going to post these three different versions of the Mardi Gras song.  So I’m going to post these coming up. So be on the lookout for those 3 versions of the Mardi Gras tune. Okay. Thank you so much for joining me.