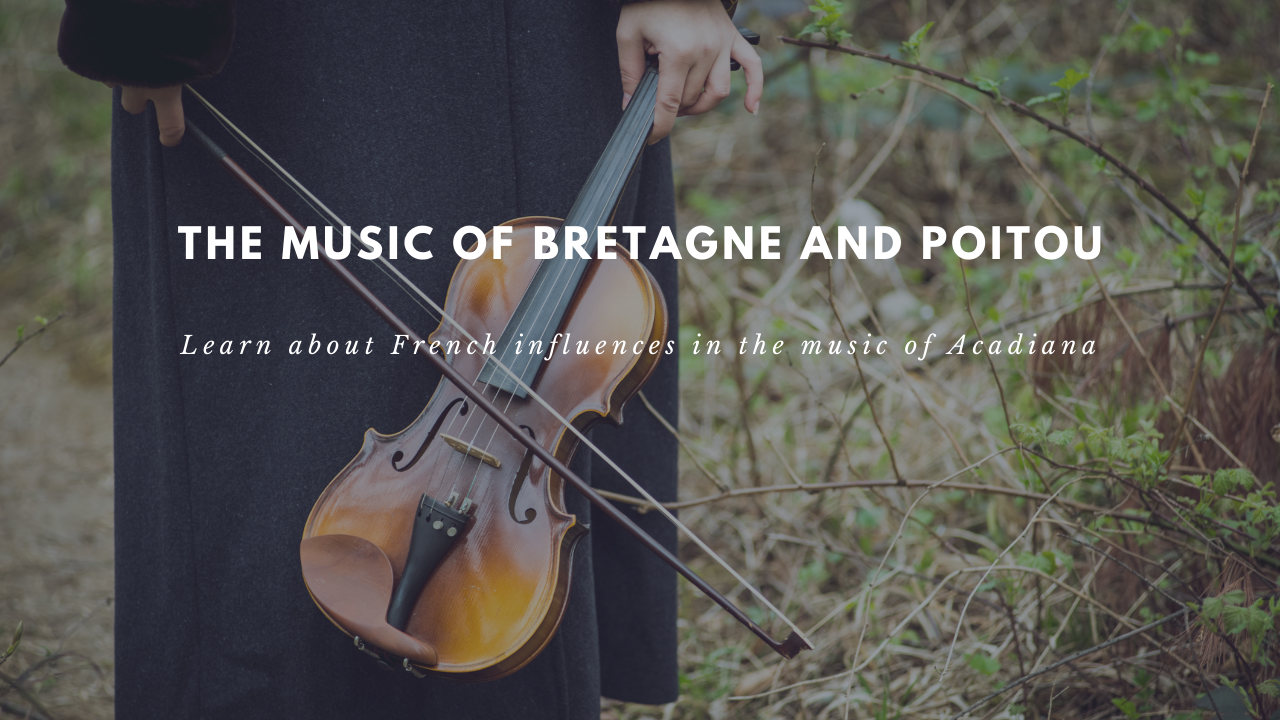 The Music of Bretagne and Poitou

Hi! I’m Mitch Reed and today on my vlog I’m going to talk a little bit about the music from Brittany and Poitou. I’m very lucky to have some friends from Brittany who taught me a couple of fiddle tunes that I thought were really interesting and I just want to talk a little bit about that. This is the area of France where a lot of the Cajuns came from. The Acadians, a lot came from Poitou and went to Nova Scotia then ended up in Louisiana. Brittany as well was a place where a lot of…well, some of the names you find around here in Southwest Louisiana, you’ll see there as well. So there is a connection. I don’t know how much of a connection musically there is, but I’m sure there is. So I thought it’d be fun to talk a little bit about that and play those two tunes that I know from Brittany.

One of the interesting things about these tunes is they’re in a different tuning. So what I had to do, I took my violin and I’m tuned like this, I’ll let you know, I’m tuned E (so that’s the highest string), A, D and then I dropped the G string all the way to a low D. So the last two low strings are in octaves. So that’s kind of cool and sounds kind of neat …[1:29]…sounds very bagpipe-like.

Alright! So that low string that’s tuned all the way down to D, I never play any notes on it. I just rock the bow and catch it…[3:05]…and it blends with the D string and the A string as well. So that was a D minor tune. I’ll play one in D major…it also works with the major keys as well…so D major. And this is another tune that I learned from… this one I learned from Eric Martin from Brittany and it was a tune that he used to play with his Breton band called Von The West. I don’t know the name of it but I liked it a lot. So I’ll play that one and then yeah! So it goes like this…[3:50]

So yeah! These are a lot of fun to play. They’re just so different from the Cajun stuff and even the Irish stuff that I play and again what really makes it is that tuning…[5:21]…So it’s a…[5:23]…And I believe they use this tuning in some old-timey Appalachian tunes as well. I don’t know of any Cajun or Dennis McGee tunes in this tuning but Dennis McGee was one Cajun, and Varise Conner, that used a lot of different tunings to get different sounds out of the fiddle. So that’s a lot of fun.

You could definitely use this tuning with some of the tunes that we play and the one that just comes out right away is the Mardi Gras song…[5:54]

So that’s a lot of fun. Yeah, it would probably work with some other tunes, too. It definitely gives it a bagpipe sound but that’s the amazing thing about the fiddle is you can do some different tunings and give it a totally different sound, it makes you play totally different. So definitely don’t be afraid of alternate tunings that you hear about and you want to try. I think it kind of opens a whole ‘nother door to fiddling. I think if I would have just stayed E-A-D-G or tuned down to Cajun, it would get a little boring. So it’s fun to experiment with different tunings. If you have any kind of basic music theory knowledge you can even figure out some different tunings that would work, that can blend with tunes. They work especially well with tunes that are just on two strings. If you have that, you can tune the other two strings or one string to something that’ll blend in that.

So pretty cool! And I think as far as the origins of the violin go, you know, the violin came out in the 1600s and as it made its way across Europe, most people played Baroque music on it. But you can definitely see that when the violin got to the west coast of France, they were playing a lot of bagpipes and instruments that had a drone, that always had a drone.  So you can totally understand why they would tune their fiddle this way. It makes total sense that it would sound like the other instruments and also even by itself it would sound like a bagpipe.

Well, thanks for joining me today. I just wanted to talk a little bit about that and talk about the connection that we have, the Cajuns and the Creoles, to the Celtic people from France. It’s not like we go back and forth all the time but I think there’s still a lot of interesting things that we brought from that area that you kind of have little hints of it here.

So thanks so much for joining me and I hope you have a great day and I’ll see you out there soon. Stay inspired, keep on fiddling, and tune into some more of my vlogs in the future. Thank you so much. Bye Bye.