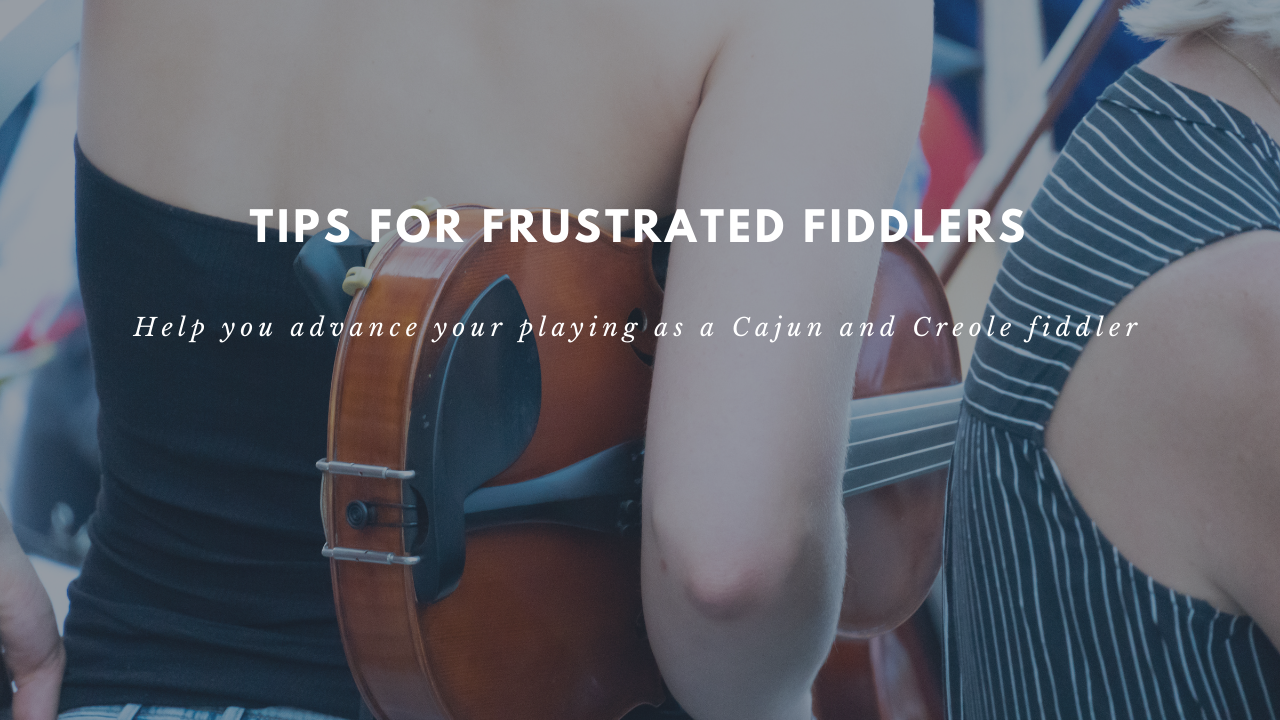 Hi, I’m Mitch Reed, and welcome to my vlog. My vlog today is on being a beginner Cajun fiddler. So what I mean by that is as a beginner is if you’ve been playing maybe for six months or up to a year, maybe even two years, kind of depends on how much you practice and how much you play. I always tell people that you definitely want to play every single day. It doesn’t have to be an hour a day, but if you can pick up the fiddle and at least play two tunes a day on the fiddle, that’s a really great way to stay in touch with the instrument. Not only that but also gradually grow and get better and better. Because as you’re learning, you’re going to feel like you get into these ruts and you’ll feel like you’re not getting any better.

And you are, but you just gotta stay strong and then keep doing what you gotta do. Of course, sometimes we don’t know if we’re doing the right thing. We don’t know if we’re practicing the right thing. So that’s kinda what I wanted to talk about. I do notice a lot of times I’ll get requests or people will ask me to teach them tunes. And I’ll ask them, well, what level are you at? What do you feel you’re at? If you’re a beginner or intermediate or advanced? And a lot of beginner fiddlers sometimes get frustrated because they want to learn the harder Cajun tunes like Jolie Blonde or The Perrodin Two-Step or Lake Arthur Stomp or something like that. And so I try to just tell them that, you know, you just have to be patient and what you want to do is you really want to just grind out those basic tunes. I think if I were to make a list of some basic tunes that as a beginner Cajun fiddler that you need to just play over and over and over again. One is Mon Vieux Wagon, which is by The Balfa Brothers. So that’s this one. [01:58]

And I’ll play it slow just to show that you know, tempos like that are important too, to try to keep things slow. Don’t try to play things too fast, too soon because then you’re just going to play sloppy, and then later on down the road you’re going to have to fix all that sloppiness, bad habits, stuff that you’ve developed. So you really, it’s really tough cause you have to be very disciplined in the beginning. And that’s what’s good about, you know, watching videos going on YouTube, talking to fiddle teachers, having private lessons is they’ll help you to, you know, realize like right now is the time that you have to play clean and slow. That’s, that’s the way to do it. So that’s a two-step. The waltz that I recommend that’s really good for beginners too is Madame Sosthene. So that’s the one… [02:54]

The other thing is a double stop. [03:15] Doing two strings. It’s tough to say exactly what you should do with that. With some people, I find it’s better to wait and do double stops later after you’ve been playing a year or a couple of years. Just focus on playing single strings but some people, if you’re really really excited and you want to get those double stops, there’s a couple of exercises you can do. One of them is just doing the first five notes on the A string with the open E so something like this. [03:48]

But, you will get frustrated when you try to do double stops in a tune that you just learned. it’s tricky. so I always say learn the tune first single string, single notes, and then to add the drone strings, the extra strings. If it drives you crazy and you get too frustrated, just play the single strings. If you can hang with it, then keep doing it, you know? So it’s all about staying inspired, not getting too frustrated. You don’t want to burn yourself out where you want to put the fiddle away for a couple of days. You always want to pick it up. But it will be frustrating. I mean this is part of it, but then you also have your moments where you’ll be rewarded as well. So yeah, Mon Vieux Wagon, Madame Sosthene, and then the third one I was gonna say is a blues. The Bosco Blues is a good one. So this one. [03:48]

So that’s another good one. If we were to make a list of five tunes to grind out as a beginner fiddler and not be so distracted by the fancy tunes that a lot of people play that are really good, but they’re not at your level yet. So I would say the other one that might be good is a two-step is Johnny Can’t Dance. So again, I want to play it slow and clean. [05:33]

And that’s a good one for bow crossings cause you’re doing a lot of rocking back and forth from the A to the E string. That’s a really good one too. So again, we’ll put that on the list. So that’s number four. And then maybe number five could be, you know… Something I like a lot is this one for number five. It’s the Balfa Brothers. They recorded on the Yellow album. It’s called T’en A Eu Mais T’en N’aras Plus (translation: you used to have some, but now you don’t). It’s pretty simple. It goes like this. [06:21]

Alright, so there you have it. Those are five beginner Cajun fiddle tunes that you can grind out, play over and over and over and over. You’re probably going to get totally sick of it, but that’s just the thing you have to do. You want to get really, really perfect on those tunes, and then maybe try to add some double stops in later. But yeah, avoid the hard tunes right now. Because again, it’ll just lead to you playing sloppy and you’ll also be very frustrated because there are tunes that are at a higher level that you’re not really able to get just yet. So, alright! Well, hey. Stay inspired, keep on fiddlin’, and thanks so much for joining me today. Good luck. Thank you!