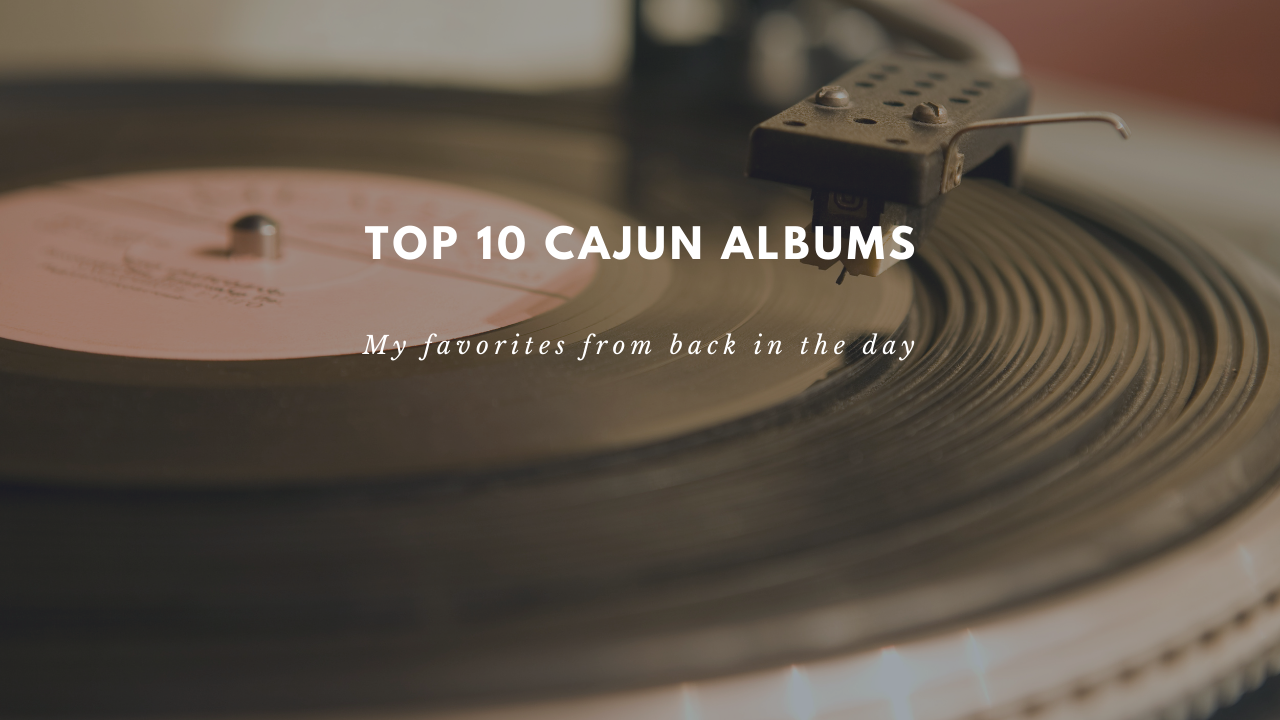 Hey! How’s it going today? I’m Mitch Reed and I thought it would be fun to talk today about the top ten Cajun records that have really influenced me on the fiddle. These are the top ten recordings that I have found a lot of inspiration to listen to and that I feel that helped me to become a better fiddler. There are also recordings that I recommend for my private students that take lessons with me.

I always say the top three fiddlers to listen to are Dennis McGee, Canray Fontenot, and Dewey Balfa, and of course, I always recommend an album from each of those guys. But I thought it will be interesting today for my Vlog to talk about the top ten.

If you were to own ten Cajun records that could really help you to get better on the fiddle and also understand, almost like, the evolution of the Cajun fiddle, these would be the top ten that I recommend. Dennis McGee, being one of the oldest of the recording artists because he was born in the late 1800s and recorded in 1929-1930. And then Canray Fontenot, really just a master Creole fiddle player who also played with Bois Sec. Great recordings to listen to as far as if you are a fiddler, how do you play with an accordion? Or how do you make it sound Creole? Or how do you make it sound more Cajun?

Let me just start on my list and I will do my best to explain a little bit about each record and why I recommend it. I did not really number them so much as the best is number one and number two, three…I just kind of thought about the top ten. But I think starting at number one is definitely one of the records that is talked about the most if you are going to learn Cajun fiddle. That would be the Balfa Brothers Yellow Album. That is what most people refer to as the Yellow Album. And really what it is, it’s just the Balfa Brothers play more Cajun traditional music and it’s actually two records that were put on to one CD or one recording. If you buy it on iTunes it’s actually two records in one. The last record has Marc Savoy playing accordion and some fiddle, too. That’s one of the most listened to, I think, and requested as far as tunes to learn are often on that record: The Balfa Brothers yellow album.

So, like I said, this is my personal opinion of things. The next one is Cheese Reed’s Cajun House Party album. That is a really interesting record. It has Marc Savoy playing accordion on it and different musicians from Eunice/Mamou area. That’s a really powerful record. Cheese Reed’s fiddling is amazing and then also his vocals are just really, really soulful and just everything he does: the way he plays, and Marc plays along with the recording and the way he goes from playing the fiddle to singing…I mean it’s just an amazing example of how Cajun music was back then, and hopefully how it will continue to be good and grow and be tasteful.

Number 3 is Canray’s ‘Hot Sauce’ CD. Basically, that was done by Arhoolie records and Mike Doucet joins him on, he plays along with Canray on mandolin and fiddle. It’s an awesome record and it was actually recorded in Canray’s house. Chris Strackowitz, the owner of Arhoolie brought some recording equipment into Canray Fontenot’s house and just recorded them there. From the stories I have heard that they would stay up very late to the early evening and drink whiskey and have a good time. It’s an awesome CD, so that’s one that you should definitely own!

Alright, so number 5 is Dennis McGee, The Early Recordings. A lot of people refer to this record as “The Green Record”. The picture on the cover, actually it is Sadie Corville’s father and uncle. So it’s not Dennis McGee or Sadie on the cover, but on the recordings, it’s Dennis McGee and this other musician name Ernest Frugé who was an amazing second fiddler. This guy is incredible to listen to, basically played really busy like Dennis but on the low strings, and did some different tunings and stuff like that. Sadie Corville is also on there, but the stuff with Ernest Frugé and Dennis is what’s really amazing. Dennis McGee, I think in his later years was known to be kind of an old-timer, maybe some people would even say a scratchy fiddler. But in these early recordings, he is just a really clean, tremendous fiddle. I mean, playing very, very fast with a lot of ornamentation. You know, if you’re a fiddler out there and you think you can play what he’s playing on that record, well I want to meet you one day ’cause it’s some awesome playing. That one’s an incredible record. So that’s The Early Recordings. It’s all 78 recordings of Dennis McGee; a collection of 78 recordings.

Number 6 is Beau Solo which was a record, a project that Michael Doucet did with his brother David. And I highly recommend this one, because it really shows fiddle and guitar and how well the fiddle and the guitar go together and what Michael did was he basically honors maybe 6 or 7 legendary musicians; Canray, Dennis McGee, Wade Frugé, Varise Conner, you know just a few to name. He picks their tunes and kind of honors them. But it’s also Michael’s version of those tunes and they are really, really powerful. And David Doucet’s guitar is playing is amazing. So that is one I highly recommend: Beau Solo. Michael Doucet and David Doucet, and it’s on Arhoolie Records as well.

The next one, number 7 might be hard to find, but if you can find it this record really influenced me a lot. It’s Adam and Cyprien Landreneau and the name of the record is called Cajun Soul and the photograph on the record was hilarious. I don’t know if they were joking or if they were being serious or weird or what but it’s a picture of Adam and Cyprien Landreneau sitting on the floor with scuba diving fins on. Which, basically what they are doing is they are saying that…you know, yeah, Cajuns there used to be a joke that the people that weren’t Cajun, that lived in Texas and North Louisiana and Mississippi would say, “Oh Cajuns, they have webbed feet.”  So they have these flippers on, kind of symbolizing, “Yeah, Cajuns had webbed feet”. It’s a crazy cover and it has to be a collector's item and if you do come across it, buy it…not only for the musical value but just the photograph is amazing…and frame it! That one was Adam and Cyprien Landreneau’s Cajun Soul, an amazing record of fiddle and accordion.

Number 8 is Under the Green Oak Tree with D.L Menard, Dewey Balfa, and Marc Savoy and it’s just a powerful, powerful record. What I like about it is Marc plays a D accordion and Dewey Balfa is tuned standard EADG; just the fiddle is so crisp and clear and cuts. Marc accordion playing is amazing and DL’s doing this walking guitar bass line, you just feel like the three musicians were so connected and so in their prime when they did this record and it’s just super powerful. So that is one you should definitely own, it’s Under the Green Oak Tree like I said, Dewey Balfa, D.L Menard, and Marc Savoy.

Alright, the last one, and I didn’t mean to put it last…I don’t think it’s the least or the last one to get. I feel like this one could be number 1, you know, in my opinion…but it’s the Wade Frugé album that Wade did with Marc Savoy and Tina Pilione. Vorence Berza is playing drums and singing and his vocals are amazing. The Vorence songs are amazing and Ann and Marc are awesome. But Wade’s fiddle playing is so unique it really is, his tone and Chris Strachwitz did a great job of capturing, recording him, and capturing that tone that Wade had because it was a really unique tone. It was almost, for me it was almost like a whispering, it had like this wind quality to it, this whispering but soulfulness and sadness and just powerful. I remember going to Wade’s house maybe a year after he recorded it and he had the vinyl record, he pointed to the picture that was on the cover and he said, “You see me right there, I was almost dead. That man, Chris Strachwitz pushed me so hard to do that record, he made me play the best that I could play, and he pushed me so hard I almost died.”  I thought that was really funny because it is really hard, physically hard and mentally hard to do a record and they really were able to pull everything out of Wade and get him to really show his true spirit of how you play the fiddle on that record. That one is powerful, so powerful.

Those ten that I just mentioned are to me; let’s just say if those were the only records that I owned of Cajun music, I would be happy with that. It’s an amazing collection. I’m not saying go out and buy these tomorrow, but if you have some of these, listen to them again, and definitely, if you want or need inspiration on the fiddle you should listen at least from a track a day from any of these records. Put on a record when you are washing your dishes, cleaning your house, driving in your car on a trip, put these records on; let them just go in your subconscious. That is what you want to do, that is how to me you learn Cajun music, and how you learn about the styles and the evolution of music even the core changes and things like that. Thank you so much for joining me today on my Vlog of that top ten fiddle records in Cajun and Creole music that you should own that will help you become a better Cajun Creole Fiddler. Thank you so much…Keep fiddling and stay inspired!