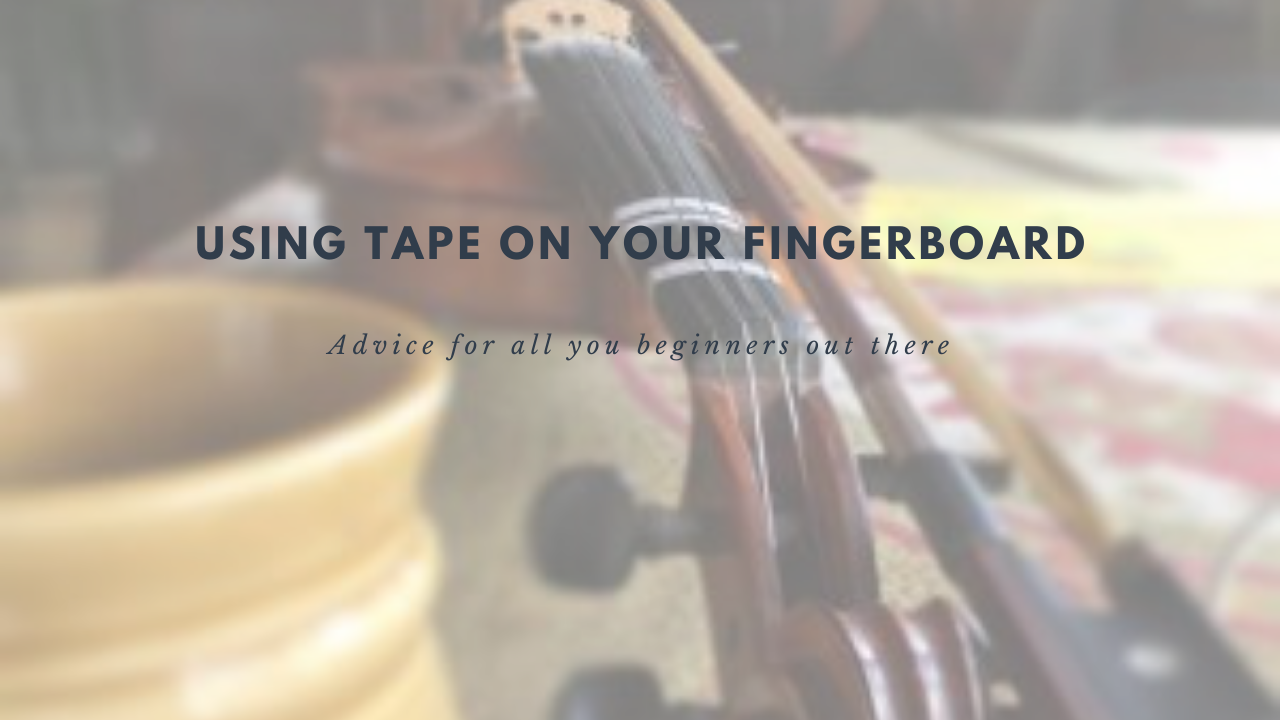 Using Tape on Your Fingerboard

Hi! Welcome to my vlog…and my vlog this week is going to be on, “Should I have tape on my fiddle or not?” This is a question I hear a lot and this is what I usually say to people is if you’re a total beginner, if you just got a fiddle, you’ve never played fiddle before, definitely, you want some tape on your fingerboard. You want to make sure it’s in the right place so either bring it to a luthier that can put it on for you or a teacher, a fiddle teacher, violin teacher, music store, something like that, but you definitely want to start with some tape on your fingerboard.

So again the question should I have tape or not? My understanding is if you’re frustrated with your pitch if you’ve been playing for maybe a year and maybe you’re going on your second year, if you’re frustrated with your pitch, find maybe the notes that…the one that you feel you’re awful in and a lot of people tend to be off on the third finger. A lot of times the third finger is a little bit more of a stretch than we think and so I have recommended people after their first year just leaving that third piece of tape on. But if you’re in your first year I say get all this tape; it will really help you a lot. And you’ll start to even visualize in your head like where the fingers go when you start to learn by ear when you hear a note, and you can start to identify where it might be on the fingerboard. You’re going to visualize this pattern in your head and it really helps a lot. So it’s the advantage that guitar players have and mandolin players and bass players and things like that, is they have frets. So this is the equivalent to frets basically. With the violin, because it doesn’t have frets, when you make these pitches they have to be right on. So I actually…for beginners I cut my tape a little wider than would need to be just so that it gives you a little bit more room to…you don’t have to be perfectly accurate in the very beginning…so it gives you a little bit more to see and a little bit more space to put your finger on. So I cut them a little big.

But yeah, talking about that, that’s a great way to get started, is having tape on your fingerboard, way less frustrating, and then, if you learn with tablature, it can make it really easy. So if somebody’s writing out tabs for you or you’re getting them online or seeing them on YouTube or whatever, you can very quickly start to, you know, figure out where these notes are just using tablature and then tape on the fingerboard. So I say definitely get it if you’re in your first year and if you’re going into maybe your third year then you probably don’t need it anymore.

Sometimes even getting a new fiddle can change the intonation. That happens a lot if people go from like let’s say a factory-made fiddle where the neck is a little wider, and then you put tape and you learn…you know you get a feel for that fingerboard, and then you might…I get a lot of people sometimes want to own an older instrument and sometimes a lot of the older fiddles the necks to be a little thinner and so you can throw off your finger a little bit so there’s nothing wrong with putting some tape on, even if it’s just a little dab of tape, just to show you where that first, second and third fingers should go on a new fiddle that you’re getting used to because the intonation has changed on those fiddles.

I set up this vlog because of a lot of people asking me about this and my answer always is, “if you hear yourself and it doesn’t sound right, if you know something that’s not right, the first thing to do is tune your fiddle, make sure that your fiddle is in tune.” So that’s what I always do because some days…I have my days where I’m just off and the first thing I’ll do is I’ll check my tuning with the tuner [06:14]. So that’s the most important thing right there. If your fiddle is not in tune, it doesn’t matter how much tape you have on your fingerboard, you’re not going to play in tune. Well, what I was going to say is when you hear that you’re off and you’re in tune and you don’t have tape on your fingerboard and there’s a finger somewhere that’s driving you crazy that’s actually really good because you understand that it’s not right and you need to fix it. So that’s really good. So my advice is if it’s one finger, and it tends to be that third finger, that’s driving you crazy, put a little piece of tape, there’s nothing wrong with that.

A couple of tunes do have what we call extended third fingers and it tends to be on the lower strings on Cajun fiddle. But if that third finger like let’s say on the low G is a little bit above the normal third finger, we call that just extended third finger, put a little dab…and it’s a tune you’re working on…put a little dab of tape right there and then you can see exactly where that pitch is, that note is. And my advice is…I don’t have one hooked up but they make tuners, they make these little tuners, these clip-on tuner things here and they fit on your fiddle like this…this one actually broke because I dropped it…but these are really good because what you can do is you can see the pitch. So if let’s say you’re working on a tune and it’s just this note that’s driving you crazy, you can put it on your fiddle and you can see what the pitch is which is really- really cool. So those are great little tuners I’ll recommend. I think they’re made by D’Addario or something like that. So those are really good.

But yeah, if something’s bothering you, you hear that you’re off, that’s really good because that’s the sign that you’re learning where your pitches need to be. Again, I always say if you’re in your first year, definitely have tape. If you’re going into your second year and you’re not playing every day, maybe you touch the fiddle a couple of times a week, maybe a couple times a month, leave the tape on your fiddle or put some on because if you’re just an average fiddle player that picks it up every now and then you should leave that tape on, it’ll help you. I know it’s embarrassing, a lot of people say well it’s embarrassing when I go to a jam people just automatically think I don’t know how to play or I’m a beginner because I have tape on my fiddle but that doesn’t matter to me. If it helps you play the tune and you don’t sound like a beginner then it’s good, leave it on there.

So anyway, that’s my vlog for today and I think tape is good and there’s nothing wrong with it and I really like what Fiddlehed does on YouTube where he teaches tunes and he’s got tape on his fiddle and you can actually see the fingers. So I might actually start doing that as well just to make it a little easier to see where the notes are going. So yeah, check out Fiddlehed as well and check out mitchreedmusiclessons.com, where you can stream me breaking down Cajun and Creole fiddle tunes, beginner and intermediate.

Alright, thanks so much. So that’s how I feel about tape on the fingerboard and I hope some of that info helped you out and answered some questions. Have an awesome week and hope to see you soon. Thank you so much.